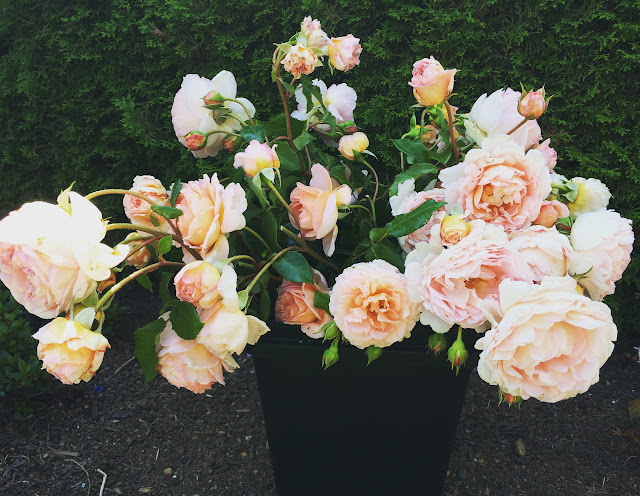 I've decided to break my routine of posting a review of the entire month and break it up for August I believe that a 50th wedding anniversary deserves special honor and especially when the couple has been faithful and is still in love!

The morning before their anniversary party, I picked all my Abraham Darby roses to add to the table centerpieces. 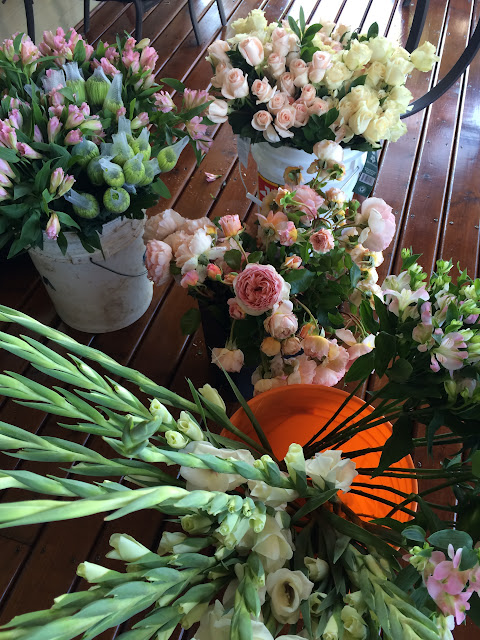 I was invited to help put together the arrangements and I was so happy to do this since I so enjoy working with gorgeous flowers. 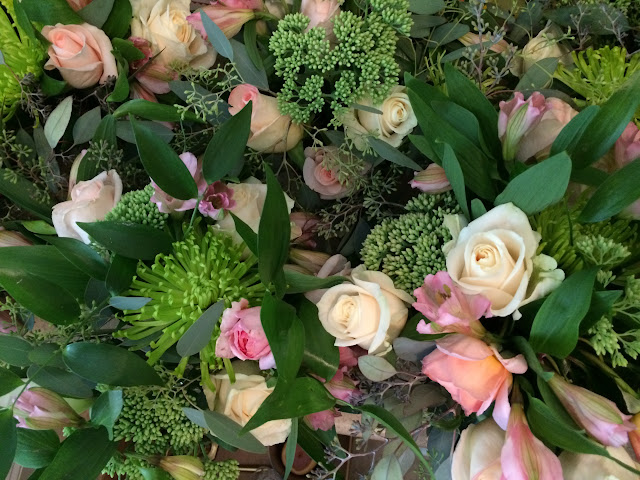 We put together hand tied bouquets which centered each table at the reception! 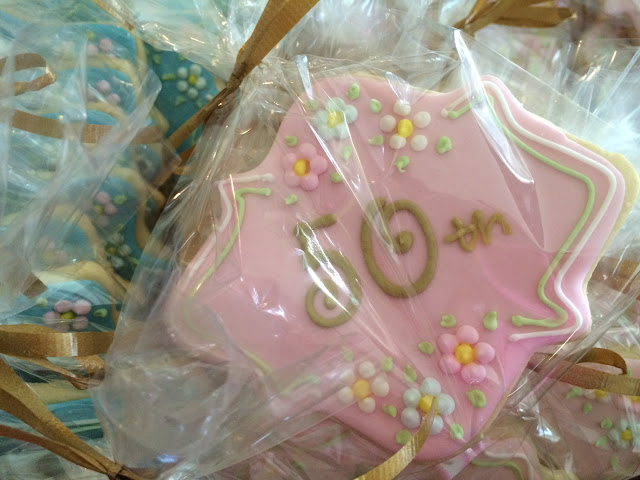 These were the party favours!  What a cute idea and bravo to the cookie decorator! 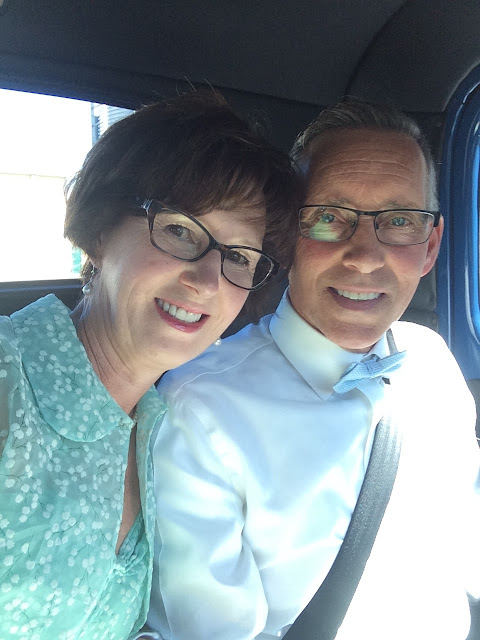 I finally got a chance to wear my $50 vintage dress that I found in Summerland at an antique store.  My beloved being such a great sport, dressed to match! 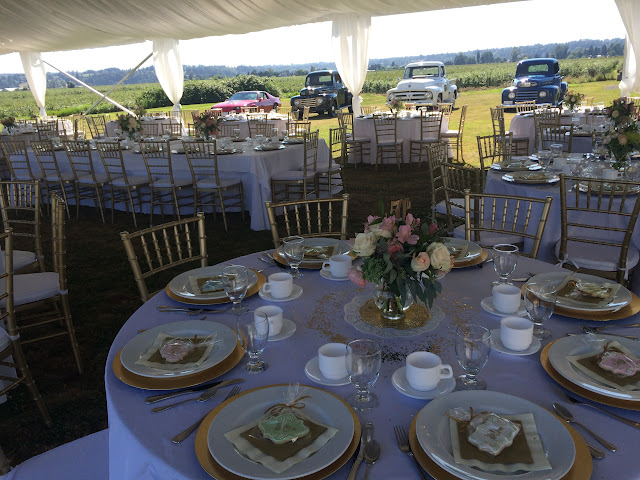 The beautiful tables and the tent  and gold chairs  were so perfect! 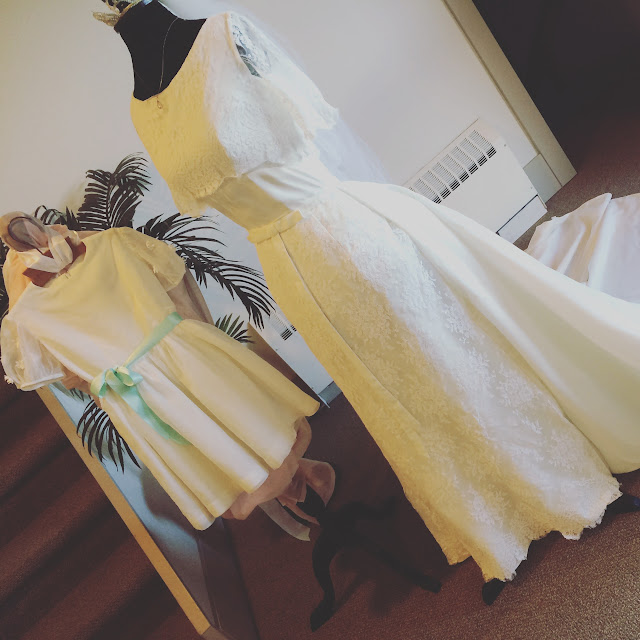 My candlelighter dress was displayed next to Mary's wedding dress. 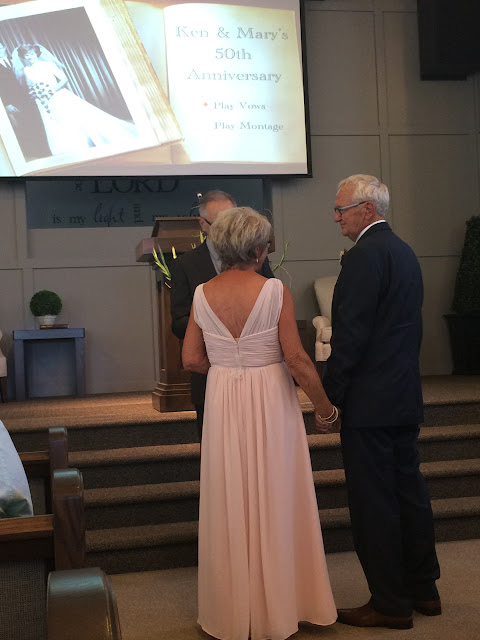 Inside the church where they were married they renewed their vows. 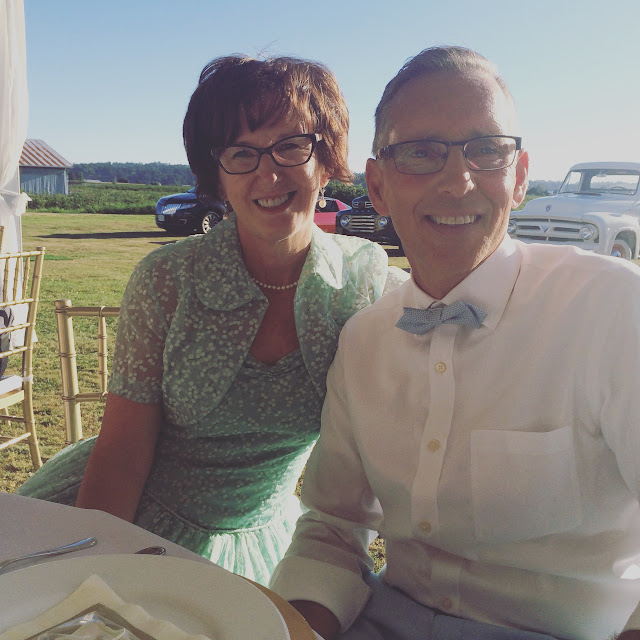 It was just a lot of fun and we enjoyed visiting around the table. 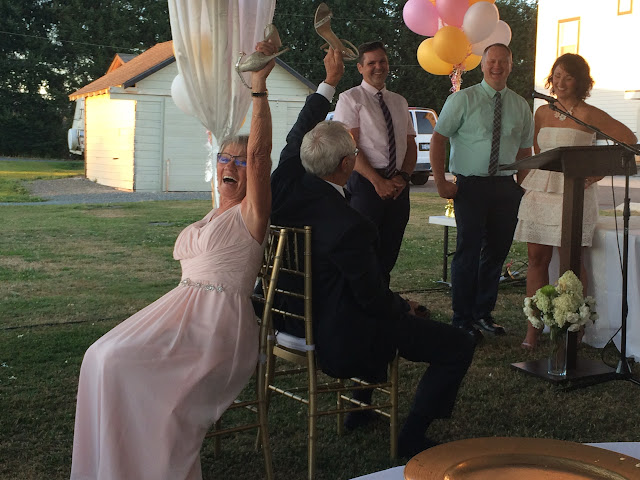 They are still a lot of fun!  Their kids (Dwain, Tammy and Ken(nny) put together a game to see if they really know each other. 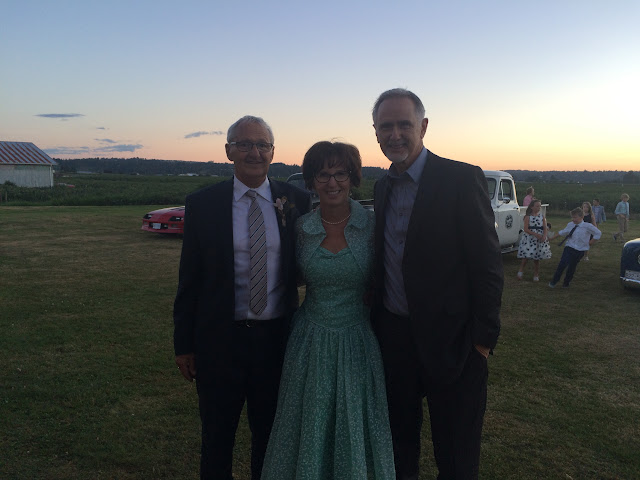 Here I am with two of my brothers.  Ken on my left, and Gerry on my right!  I was so bugged that I didn't think to grab them for a picture before my third brother left. 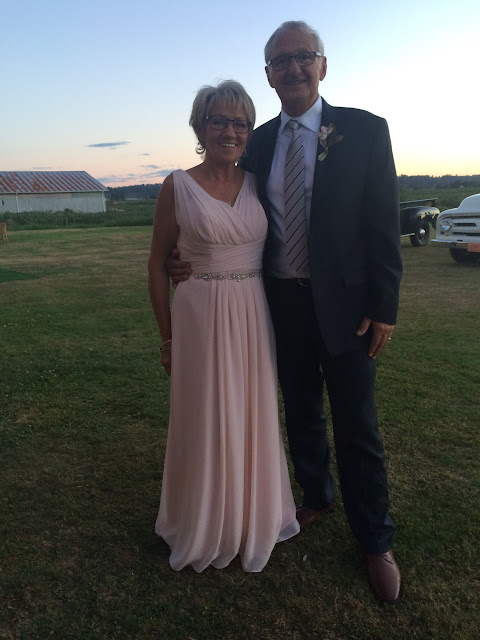 To finish this post... I'm going to leave you with the words I shared at the reception.

It was right around the time that I gave up on the idea that my Mom and Dad would provide me with a baby sister that my oldest brother stepped up to the plate and provided me with a big sister.

I have amazingly vivid memories of my growing up years but somehow I have almost none of Ken living at home.  Even then, he was such a un-bothersome kind of person that I have no troubling memories to report.  But, I recall him babysitting us once when Mom and Dad were out and he was in charge trying to study at the table.  I have no idea what led to the look of disgust he gave those of us in his charge but he made his point and I somehow understood that he deserved respectful personal space as a young adult.

However, when he brought Mary to join our family, my desire to respect personal space flew out the window and I hovered and had my first chance to observe the ways of a modern young woman and  especially loved and longed for the day when I too could  apply lipstick.

They were married at a time when it was considered acceptable to trust 7 year olds with flaming candles, sending them down the aisles to light the high and awkward candelabras.  The day started with a shampoo, rollerset and bouffant hairdo at LaRose Coiffures and I remember Mary handing the hairdresser a pearl hair clip to put in my hair for being her candle lighter. The only other significant part of the wedding day was being released after the second seating of the reception to run circles outside around the church.

Ten months after Ken and Mary got married (pause) was our parents  25th anniversary.  That was back in the day when special anniversaries were celebrated in a big way with a church service.  You know those 25th anniversary cards you buy your parents?  My mom bought one and made me memorize the verse inside.

I was loaded off on Ken and Mary the night before so that Mary could do my hair in a smart bun!  I woke up feeling so sick  and gave  Mary the very bad news that I was unable to attend and for sure could not do that recitation but in her calm reassuring way she somehow got me dressed in my pink lace dress and my brother Gerry’s black dress shoes that my mom sent for me to wear because  I had stepped on a rusty nail the day before and had a terribly swollen foot.  (and no, no one took me to the doctor but this is not about me.)  Mary somehow got me to DelMonte studio for the family photo and then to the church and …. I did that day learn that public speaking wasn’t all bad.

What they brought to the marriage.

As a 7 year old I recall that Mary brought Cutex nail polish in light frosted pink and I learned over the years that she has her own unique sign language and all who know her well understand exactly what her hand gestures mean.

Ken brought flower bouquets to the marriage and a quiet chuckle when he is happy, nervous, or worried.

Mary brought a love of flower gardening and a talent of making their home beautiful and homey even from their first little Hillcrest Street bungalow.

Ken brought the  idea of having weekends away.  Their common phrase…”we need to get away”... started actually by necessity sometime soon after Dwain was born.  When the vacuum cleaner running 24 hours a day didn’t work to help Dwain sleep, they would bring him over to our house and Mom and Dad would drive him around and around  the block until he was lulled to sleep.

After they caught up on their need for sleep, Tammy joined their family and Kenny came after her.  Their family was complete, with one sweet girl between two good boys.

Mary  brought the relaxing routine of winding down their days with something yummy for their night lunch.  That was before they developed their love for Whitespot.

Ken and Mary each brought something from their parents into the marriage.

Mary brought her Dad’s natural friendly ability to hug and if you have already said hi to Mary today, you will have most likely been greeted in this way.

Ken inherited our Mom and Dad’s sentimental and romantic ways and loves to give  Mary meaningful gifts that sparkle and shine.

Mary brought her Mom’s ability to be optimistic  while Ken brought his Dad’s ability to think ahead of all that might happen and wisely frets when necessary.

And before I leave you with the impression that they are almost perfect, I’ll tell you a few things.

Mary does not sew, crochet or knit and  Ken does not fix cars, know how to retire and stay retired or how to be mean.

After all these different parts that they each brought to the marriage, together they brought a certainty and a commitment that they wanted to have a home where God would be trusted during good days and bad days.  They cultivated an atmosphere where family matters and a place where their kids would understand that Mom and Dad put each other first.

Together with their children they became a benchmark for us when we were raising our own boys. 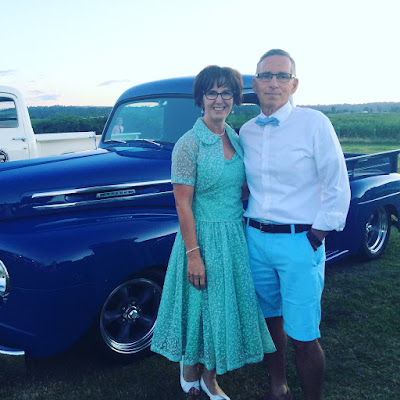