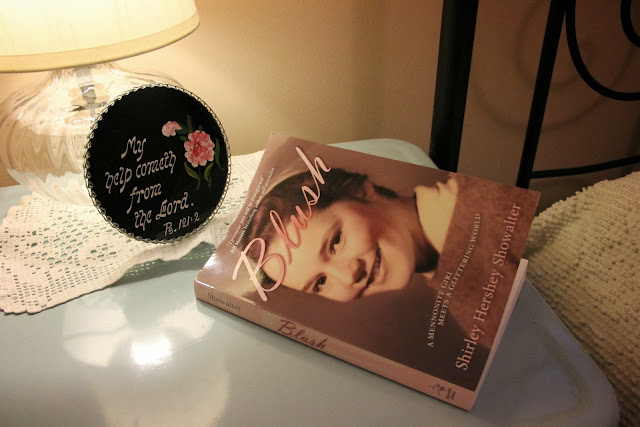 During the summer, I met Shirley Hershey Showalter at the Phoenix Mennonite convention. Kathy and I were at the MennoMedia bookstore representing Mennonite Girls Can Cook  while she was there to promote and read an excerpt from her then, soon to be released memoir about her life as a Mennonite girl in Lancaster County.  I came home to Canada and put in a pre-order through Amazon for my own copy of her book.

Blush ~ A Mennonite Girl Meets a Glittering World arrived this last Friday and on Sunday afternoon I opened up the package and at first, just admired the attractive cover with a photo a of beautiful girl with a slight blush to her cheeks.  Opening the cover and reading her dedication page, I was sure that I would at least in part be able to relate to her story because she was able to look back on her years of being raised in a conservative Mennonite home and still give her Mother honour.

Throughout the book, the author was gracious, intelligent and kind, just as my first impression of her had been.  I found myself often referring to pages in the front of the book of her family tree, wanting to keep straight in my mind which side of the family each of her captivating stories, the memories of her youth were referring to. The black and white photos placed through the book, caused me to wish for even more details surrounding each photo, knowing there is always more to a photo than what we see.

Part of the reason I was so interested to read this book was to help me understand the differences of Mennonite groups that came from Europe in the 1700's while my own family came to Canada from Russia in the 1920's.  I was curious as well, how Shirley would handle the sensitive relational issues that almost all families have.  I wondered if she would be able to take the good parts, forgive the parts of her past that brought disappointment and teach future generations something worthwhile about both. She handled it as I had hoped, and I found her faith real and evident from the beginning to the end.

I found myself wanting to underline similar things our families experienced, even though our Mennonite churches were different.  Wishing now for an opportunity to be at a book table with Shirley Showalter again,  I believe we could enjoy interesting conversations filled with exchanges of our cultural and family differences and similarities.

When she describes the church service of her childhood, I was swept back to my own country Mennonite Brethren church which I called home for seventeen years and remembered the benches where the older women sat on one side and the older men on the other side. Changes happen and in my experience, some families began to sit together as my parents did. Though my church did not require women to pin hair coverings on,  I always felt we were somehow plain enough from the world to be noticed as different. I remember when my mother stopped wearing a hat to church simply because she taught the two year old Sunday School class.  She declared one Sunday morning "the hat never stays on anyways" as she marched out of the house with her Bible, purse and Sunday School books.

I enjoyed Shirley Showalter's memories surrounding her time in Grade School.  She learned how to cope and thrive even though she was different from children of non Mennonite homes.  I was able to relate to many of her stories even though she was graduating from high school when I was finishing up Grade Two. We both, years and towns and countries apart sat with one or two others in the library during the Dance part of the curriculum in Physical Education class.  Talk about relating ! I wondered if the fact that her family had immigrated so many generations before my family did, if the basic economics caused my family to remain conservative longer, since in some ways, by the time she left for college, it seemed she was allowed more freedom than I felt when I completed grade twelve in 1977.

Each chapter in the book has a title and I appreciated the chapter called Mennonite Cooking in the Betty Crocker Era.  It was fascinating for me to see that Shirley learned all she needed to know about cooking and baking from her Mother who, according to a 1941 excerpt of her Mother's diary, was rolling out nineteen pies and several cakes a week by the time she was fourteen!  There is a number of recipes in the back of the book which I enjoyed.  Her Grandmother's excellent potato salad secret especially made me smile since it (the secret) is the same as the recipe included in the Mennonite Girls Can Cook book. I somehow convinced my mom-in-law to dice the potatoes for the photo in our book because of the beauty in both the precision of the small dice and the hands that have prepared it so often for our family.  There is a common beauty in kitchens through the ages no matter where they are found.

Shirley's last chapter in her book tells us where she is now in her Mennonite journey. I loved the last several paragraphs she wrote.  Her eloquent words gave me goosebumps and I realized then that though it is very personal to  her own life, she is giving those of us who can relate to her Mennonite experience, beautiful words to the feelings we hold.

She eventually realized her dream to teach and became among other things a professor and college president. My education resulted in a high school diploma and soon after also realized my own dream to become a homemaker. Though I feel inadequate to presume to write a book review for someone who has achieved so much academic success,  I hope my simple refections on this wonderful read have given you reason to read Shirley Showalter's memoir and wonder afterwards as I did whether her story will continue in a sequel.