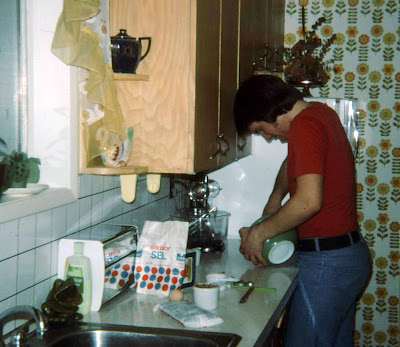 The years that we dated were good.
We spent so much time with my parents and I know they enjoyed it...
probably more than we did.  =)

To keep our evenings interesting we would occasionally bake and I found this photo recently and it surprised me that we actually had documentation of one of my very early cooking classes.

I guess I somehow thought it was important that he learned to cream butter and sugar the old fashioned way.  The mixmaster on the counter apparently off limits or maybe I liked the idea of cookie making taking as long as possible.

Not everything about this photo is part of my past...
some of it including the student is part of my present.
I also still have the green pyrex mixing bowl and the blue tea pot.

What I noticed about this picture was the dried arrangement on top of the refrigerator.
My mom kept that for years and I can still recall the scent of Eucalyptus.
It became part of our household when my Dad broke his back when his leg was trapped on the back of a dump truck.  He was given that "manly" arrangement when he was in the hospital and somehow because it was dried when it arrived...
it never died and thus was never sent away.

My mother was not a hoarder...
she just had less to clutter the home.

I don't recall her ever needing to de-clutter the house like I do once a year.
I should wonder about that some.

All this thinking...
from one photo from long ago.

OH...and speaking of cooking classes..
we are cooking up three delicious pizza's, winter salad and chiffon cake at Lepp's
on Thursday January 24th.
The proceeds will all go to Matthew's House...
please come.