down at the river 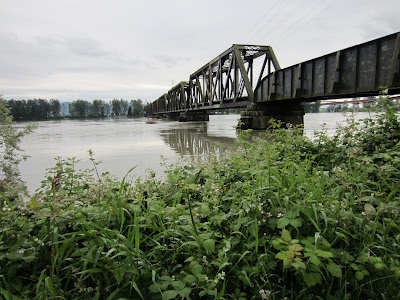 Yesterday we drove over the Mission bridge and curled back underneath it to take a photo of the old railway bridge which in my early years was the only span linking the north and south banks between Mission and Matsqui.

For many years it has been the gauge at how high the river is.
My dad would come home with reports of how many boards were showing on the swing span which has a vertical clearance of 4.9 meters when the bridge is closed.

Anyone who has lived in the area for any length of time soon learns that it is the gauge at Mission Bridge which is closely monitored during the spring thaw.
As you can see from the photo....there are no boards showing and that is a indication of how high the water levels currently are.

The river level has been going down this week instead of going up and this weekend there will be one more spike in the levels as the water from the interior makes it to the lower mainland.

The dike system is holding strong and for those that have their property on the other side of the dike...
they will likely not have issues.

My parents were evacuated in 1948 when the river flooded and our house saw the river flow through it.
Since then the dike system has been upgraded and the farm that my parents owned is safe and dry.

For those that are living along the banks of the Fraser River and have crops currently under water...
our hearts go out to them ....
and that ...
is why we listen to the reports of the water levels at the Mission Bridge gauge daily.