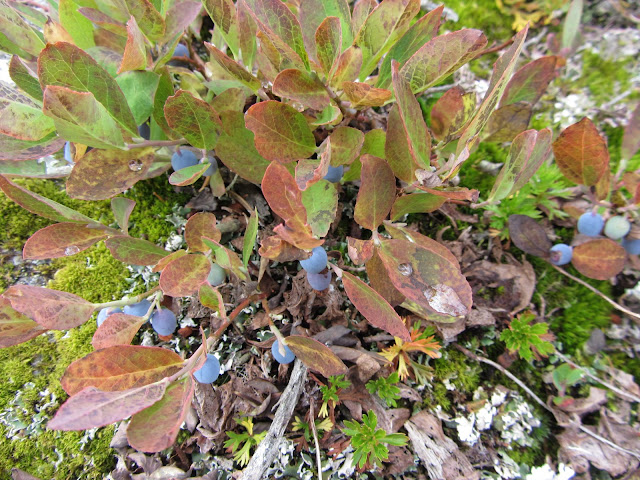 At the top of Henning Mountain I heard him murmer . ..
"wild blueberry muffins".
I picked some when I heard him...and popped them in  my mouth. 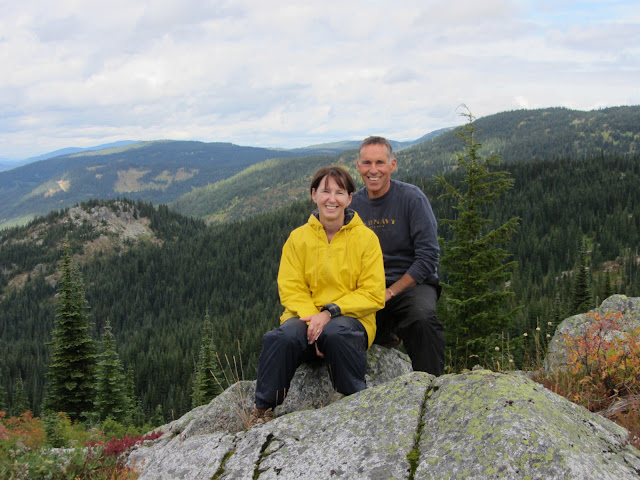 It was so pretty up there and more than once I thought it was much easier seeing the view this way rather than the conventional method of hiking up the mountain.
This is usually the time of year we tackle our one mountain climb  .. .
and hopefully this wasn't it. 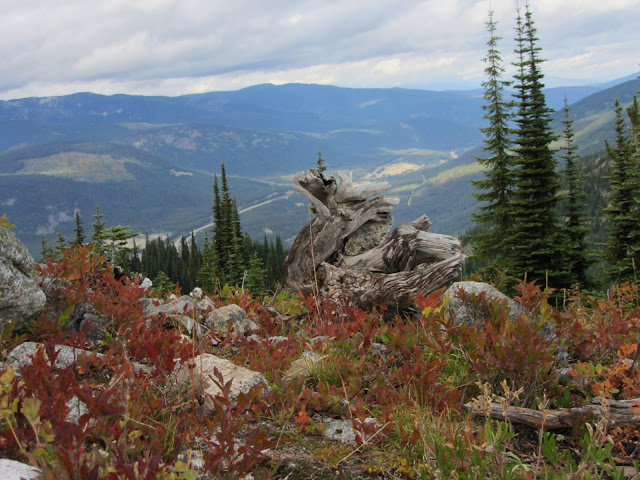 In the valley far below the Coquihalla Highway can be seen winding its way towards Merritt.
I can't help but think about my Dad-by-love who spent many hours as part of the construction team for the highway which was completed in 1986. 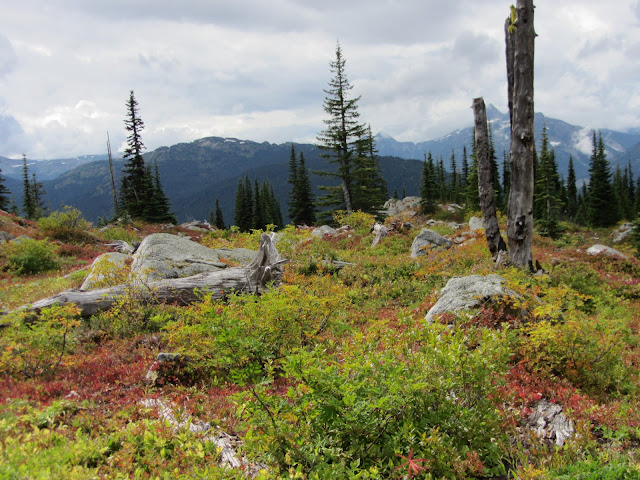 While the ATVers .. .
took their break. .
I walked as far as I could in each direction. .
enjoying the vegetation taking on it's autumn hue. 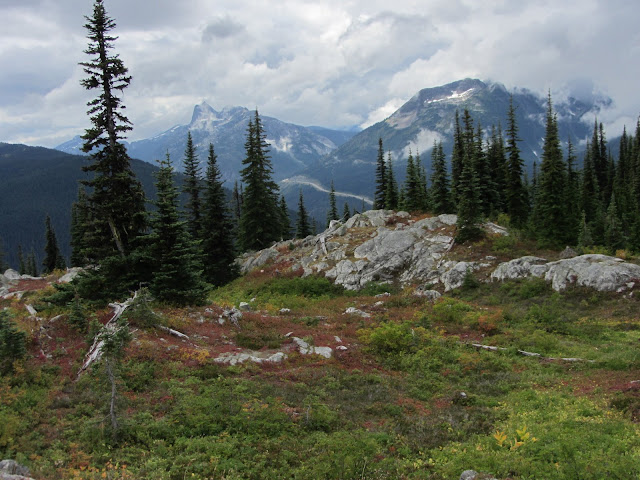 Looking south . ..
I saw the highway once more. 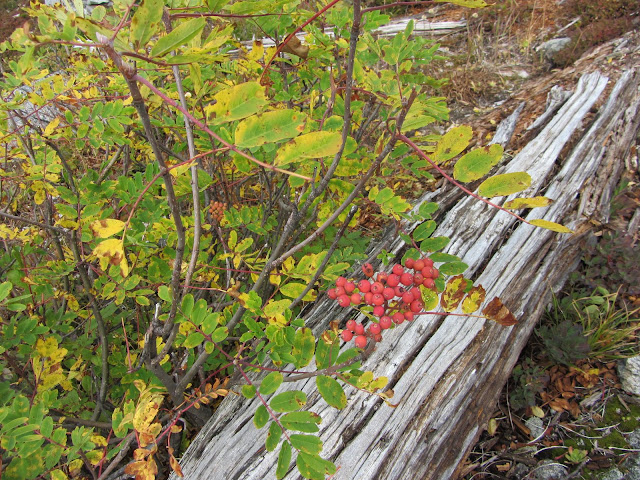 I was wishing  for family photos up on the crest. .
and wishing is where that wish will remain.
Maybe one day. ..
when the littles will be much bigger and can hold on tight. 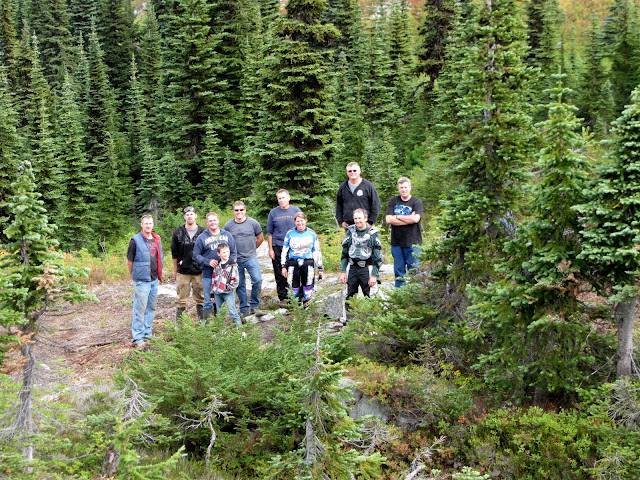 I heard the call for the break to be over and came over the hill and called them for a group photo. 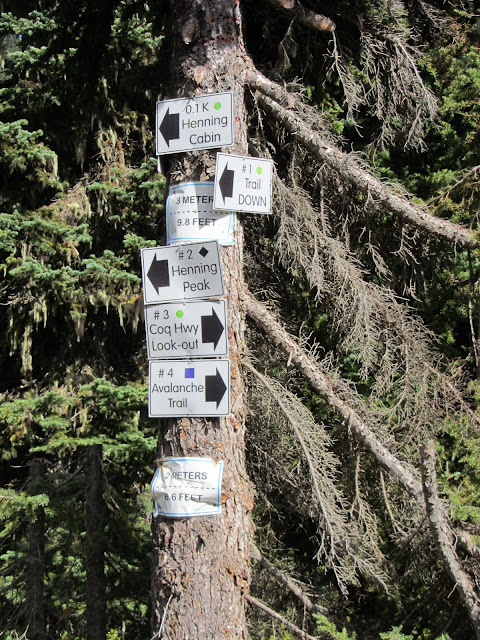 We passed the same signs that we had passed on the way up.
These trails are used year around and I noted the bottom sign gives indication of how deep the snow levels are. 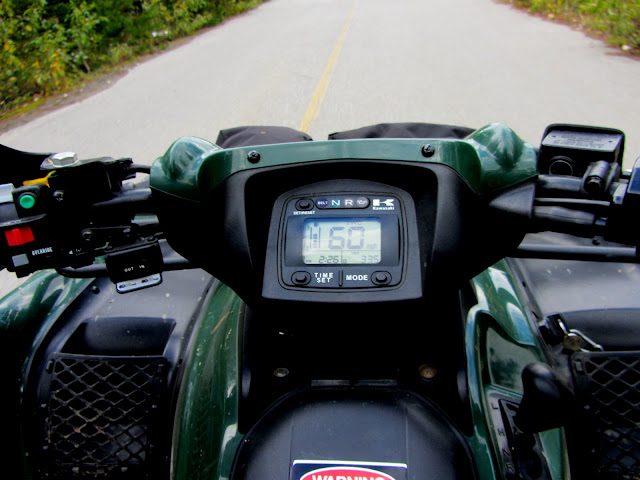 There was a small section of pavement. . .
when I hung on a bit tighter. .
not for the bouncing but for the mph I noted over his shoulder. 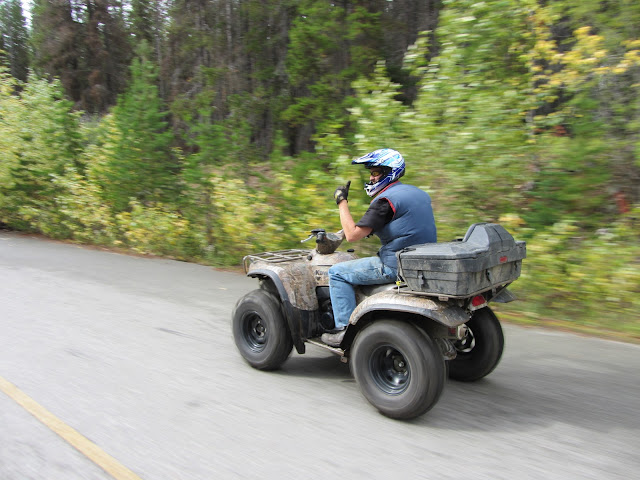 I really wondered how my pictures would turn out since there was no stopping for photo ops and this one of us passing another.  .
was at 60 mph.
I think I can see a glimpse of a smile there. 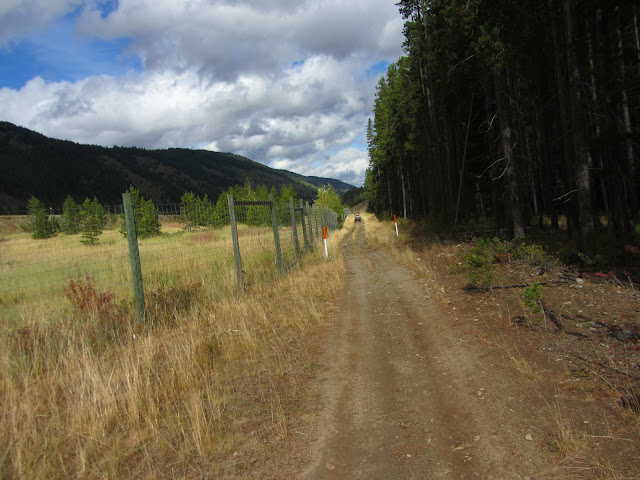 We came back to Highway levels and travelled along a fence designed to keep the cattle and deer off the highway. 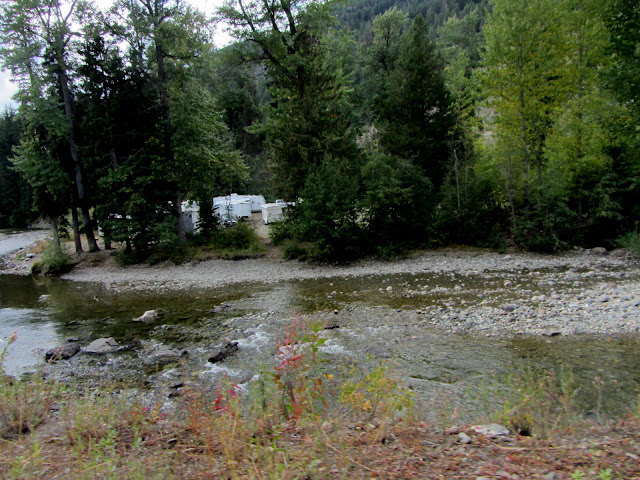 From the other side of the water. .
our campground could be seen. 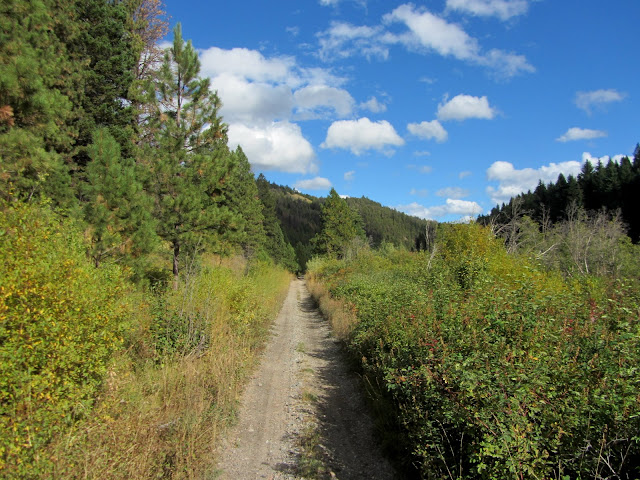 We took off on our own after that for awhile.
This time. .
we moved a bit slower and even stopped for a few photos along the way. 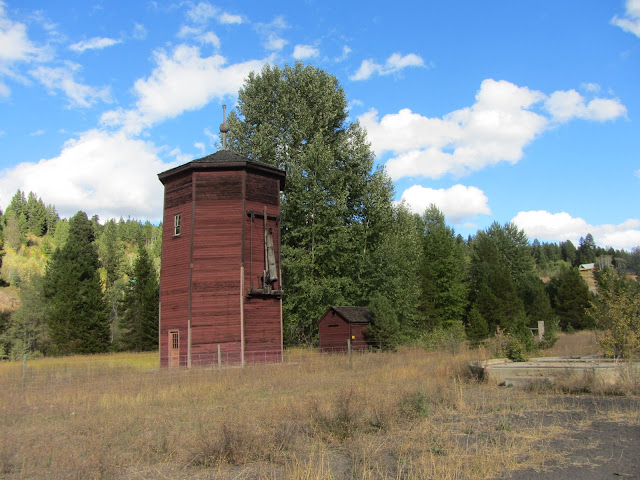 A good part of the trail is the old Kettle Valley Railway which was built in 1890's was used for freight and people until the 1960's.
Today it serves as a trail for cyclists and ATVers.
We passed this old steam house (so I was told) in Brookmere. 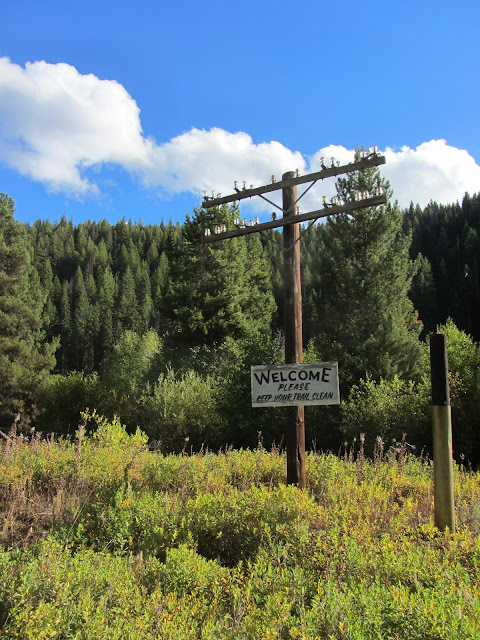 I thought it was great that we were welcomed along the way. 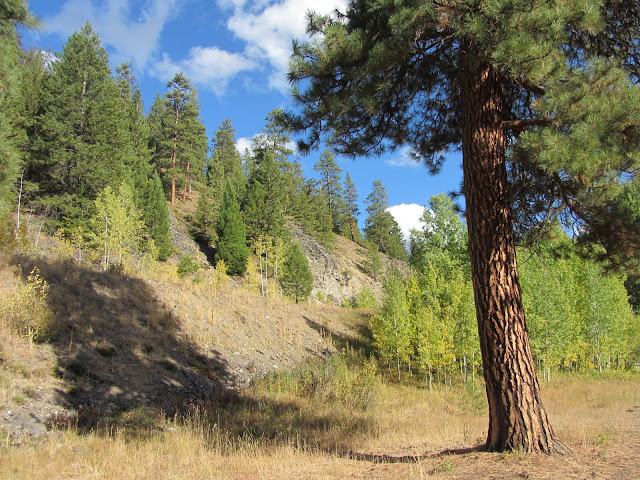 Did I mention it was a gorgeous day?
I love the bark of a Pine Tree...
and was happy to see the Pine Beetle left this old tree alone.
Maybe they don't like tough old bark? 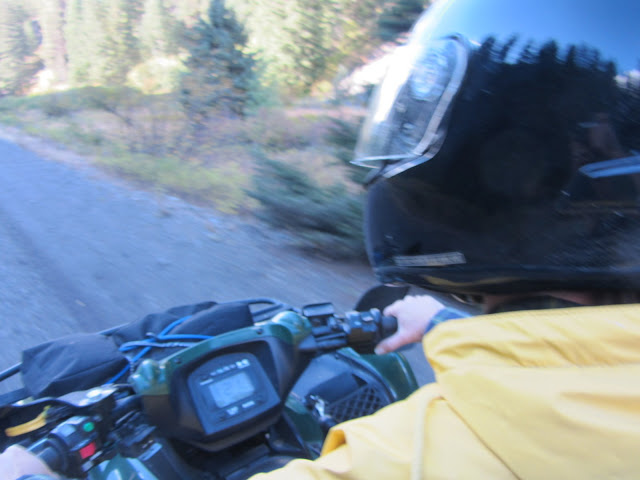 On the way back to camp..
he stopped..
told me to move forward. .
and I doubled him.
Here is the proof.
Notice. ..I drove much slower. 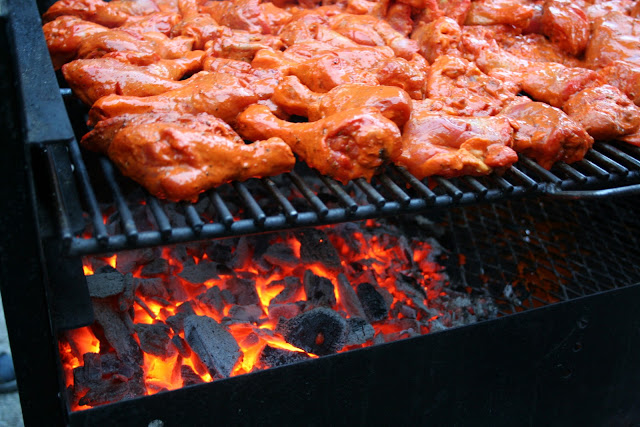 There are some traditions that are worth repeating.
Dave..brings along his Tandoori Chicken every year.
I'll be working on this recipe in the next while. 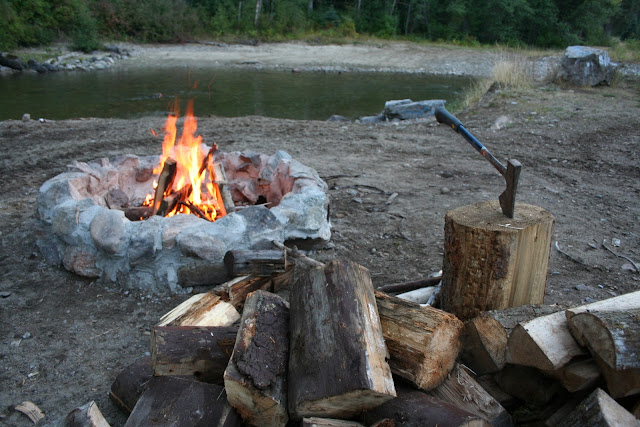 And that. .
was Friday.
On Saturday morning our boys came up to join the rest of the guys.
I was told. .it was guys day. .
and I was fine with that.
Tomorrow ..
we'll have a look at the rest of the weekend...
and the people that make it all possible.
all for now . .