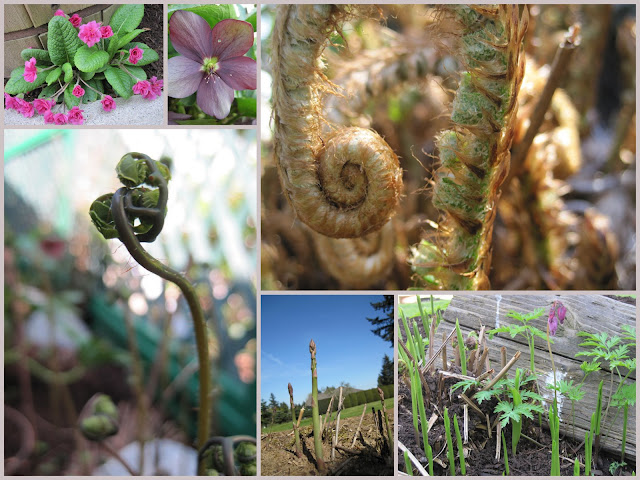 Yesterday we had coffee with friends.
Later in the afternoon after chores were done ..
we popped over to friends to dig up a small patch of asparagus  . . .
to plant in our garden. (in the middle bottom picture)
Did you know it grows from year to year and reseeds itself?
While we wandered about their yard I captured a few photos of her ferns unfurling. .
her bleeding hearts. .primroses and winter roses.
We chatted easily. . .drinking in the first really warm spring Sunday.

I felt in a celebratory mood all day.
Our book lists it's publication date as May 1st.
We enjoyed a glorious day outdoors . .
grilling burgers and visiting the DQ for their new mini blizzard that only has just over 400 calories.
I say that with one eye brow slightly raised.
And then ..
we heard the breaking news that CNN was holding a special report and speculation quickly began.
We know now that Osama Binladen was killed.


All on the first day of May.
And now today  . .
Canadians go to the polls to vote on who should be our Prime Minister.