flapping in the breeze 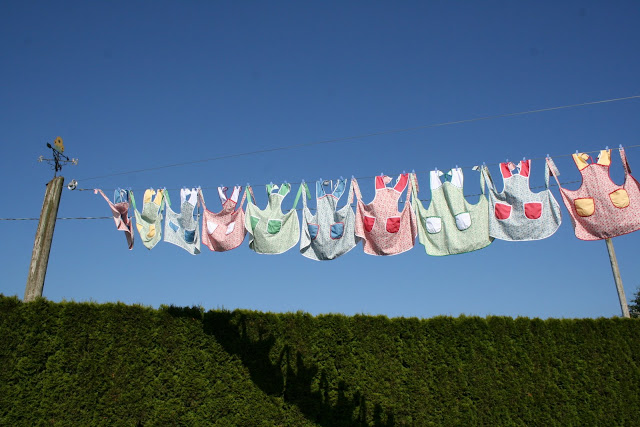 In my absolute delight in finishing the project of the aprons. . .
on a perfectly blue sky day. .
I immediately took them outside and hung them up.
There was not a speck of thought in which order they should go. . .
nor did I put much thought in how to hang them up.
I did think of each girl as I attached them to the line with clothespins. .
much like I thought of each of them when I had my apron assembly line.


The wind picked up and flapped them more than they needed to flap.
They twisted and blew right over and I had to unpin them and un-flip them and wait for the wind to die down.
All the while. .
it is a pity that no one photographed me laying on the driveway underneath the line ..
and then to the side . .
from one end and then the other.
The hedge and the power lines on the neighbors property irked me.
I unpinned the aprons and pinned them on facing the opposite direction and lay down next to the hedge to try to capture them against only blue sky.
I ran back in ...
loaded the pictures on the computer and analyzed the result.
Though it was marginally improved. .
I couldn't be satisfied since when I look out my window. .
it is the hedge and the neighbors power lines I see. .
and I wanted it to feel real.

Feeling at last as though the wind and the sun angle both cooperated. .
I clicked. . .
removed the aprons from the line. .
folded them neatly. .

and called the project complete.

The rest of the story is on Mennonite Girls Can Cook today.