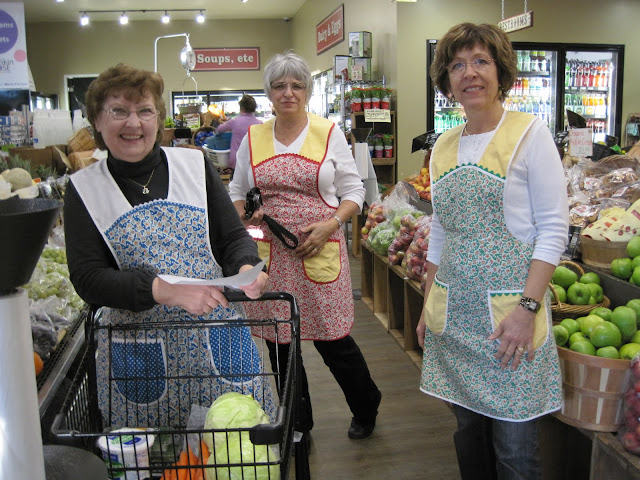 Going shopping at Lepp Farm Market took on a whole new meaning on Friday afternoon when we pulled into the parking lot at 4:30. With our list in our hands we went straight to their produce to gather the freshest produce and then to the dairy department to "buy British Columbia ".
Usually when I go there I mosey around the aisles looking for interesting products to try but on Friday we bee lined it back to their kitchen to start the borscht. 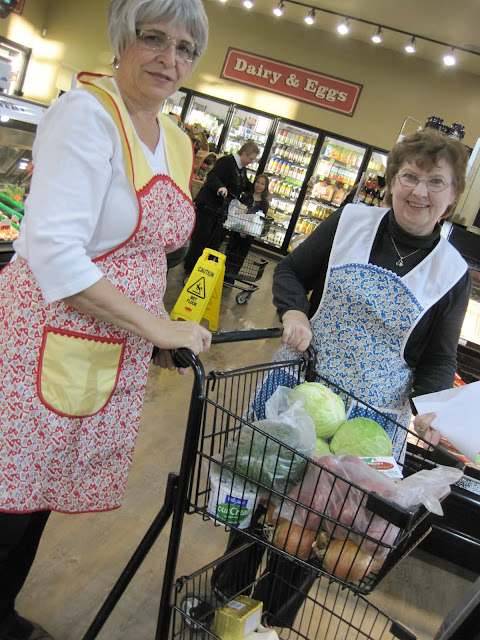 Julie was our Borscht demonstrator for the evening and Bev was her assistant in chopping and moral support. 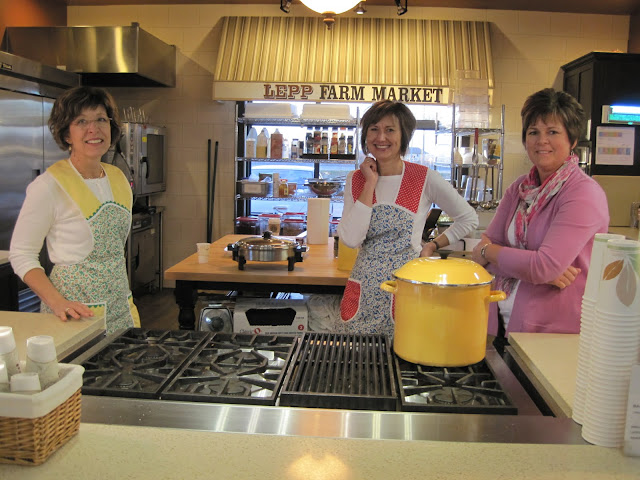 Charlotte Lepp (on the right) is the friendly  face of the market  and also the provider of confidence.
She gave us the "key" to her kitchen for the evening and left us to our chopping and preparations. 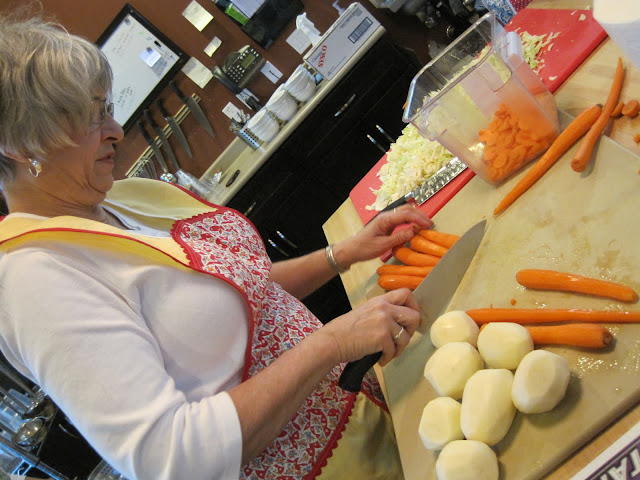 Borscht can not be cooked start to finish in only a few hours since good broth made by start takes time.
We worked around the time issue by cooking one pot of soup ahead of time so that the fragrance would greet the class as they walked in the door. 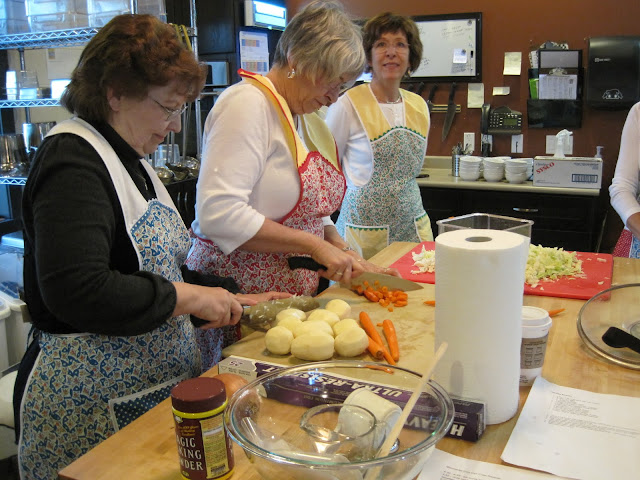 If you have heard the saying that many cooks spoil the broth ..
don't believe it.
If you can find some girls who are willing to share your kitchen full time. .
grab them. . .give them an apron and lock the door behind them. 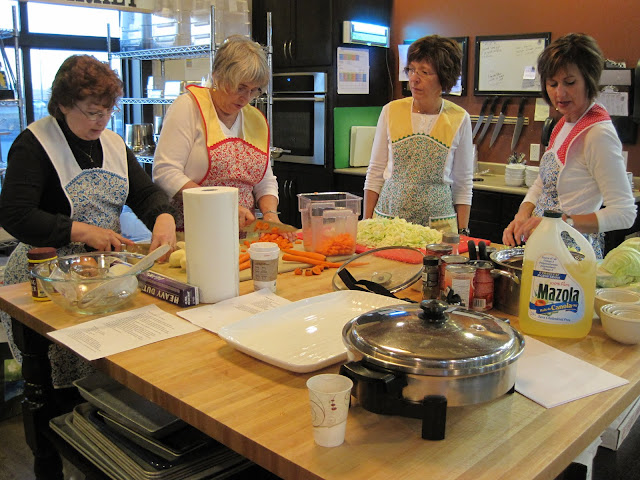 Once we got going the fact that we had never cooked together before was all but forgotten. 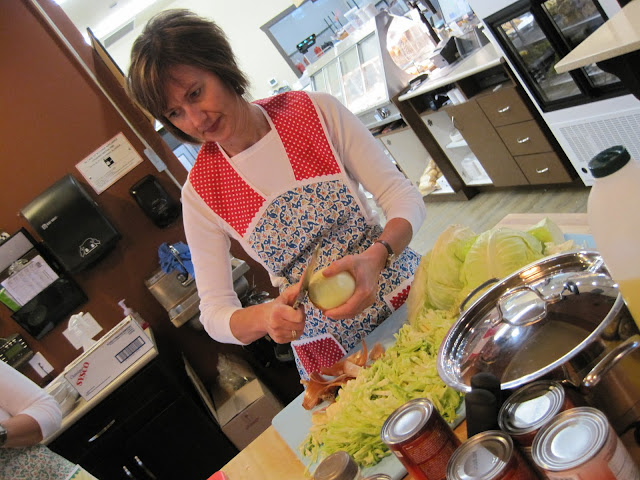 We've learned that we all have our own way of doing things in life and in our kitchens and we're glad of it.
We don't need to be cookie cutter versions of each other. . .
we are simply thankful for the roles we play in each others lives. .
and learn from each other as we go. 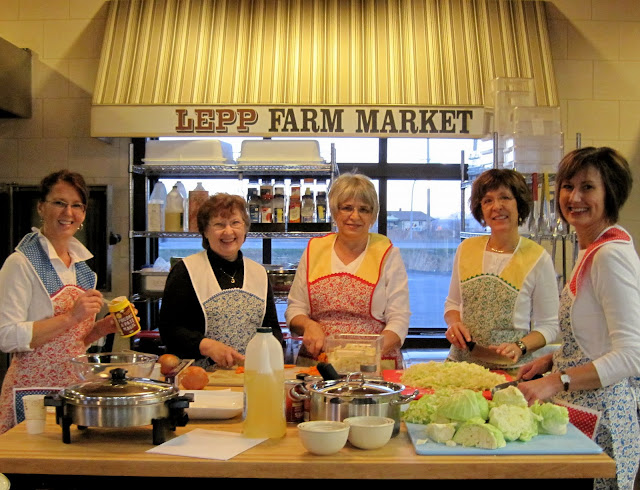 OH. ..and the aprons were sort of new for us too.
You are the second ones to see them.
The class was the first.
If you want to see more of them. .
you'll need to buy a book.  ..
or come to a class. 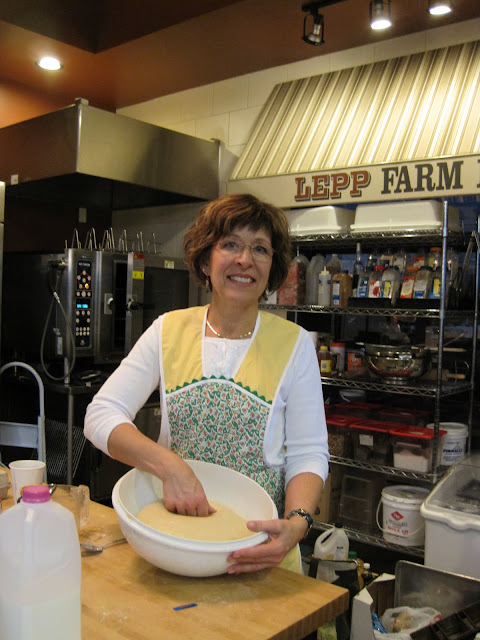 Like Borscht. . .cinnamon buns need time too.
Kathy is the master sweet dough maker.
If you think you can make dough quicker with your machine than she can with her hands.  .
let me know.  ..I'd like to set up that challenge. 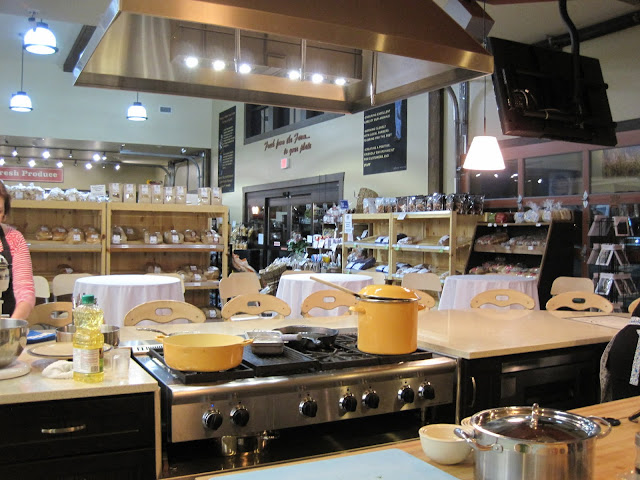 While we preparing our end of the evening.  .
the class was being set up.
They have enough room for half the class to sit at the counter and the rest of the class sit on high chairs at their tables. 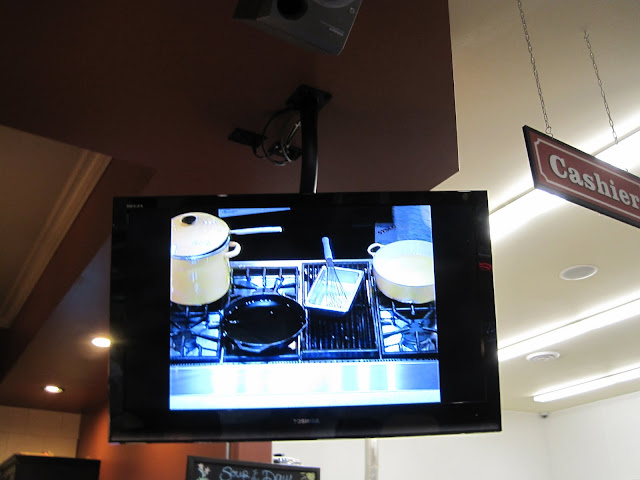 There is no worry that they might no see what is happening in the pot. .
since they have overhead monitors to catch all the action. 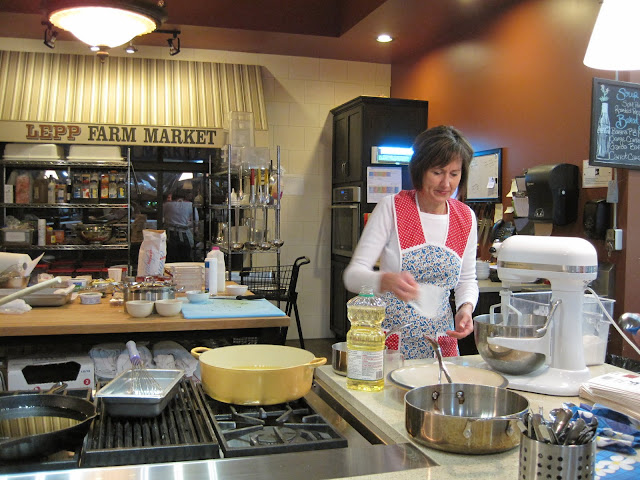 While Kathy did a full batch of dough by hand. .
Anneliese did half a batch in the machine to demonstrate that technique.
They mixed in a certain style of synchronicity and I thought it a bit of a pity that music did not accompany their routine. 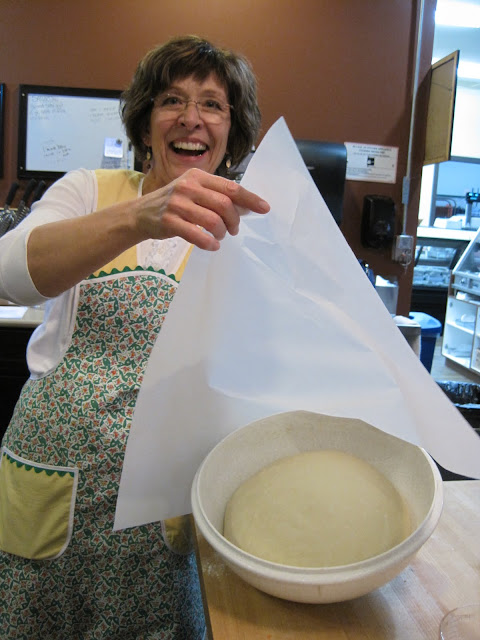 Once the dough was ready to rise.  ..
Kathy placed it in her bowl ..
and let everyone see just how smooooth. . .it should be. 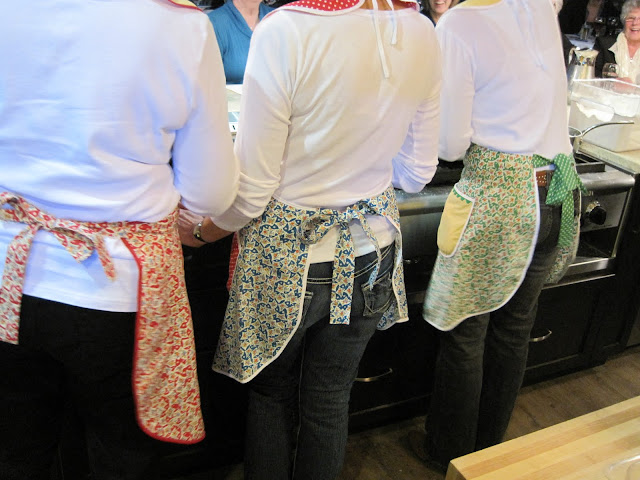 It was hard to see behind the scenes what they were always doing butt .. .
I amused myself while I waited for my turn at the Rollkuchen dough.
I haven't any pictures of the Rollkuchen since that was my part of the demonstration. 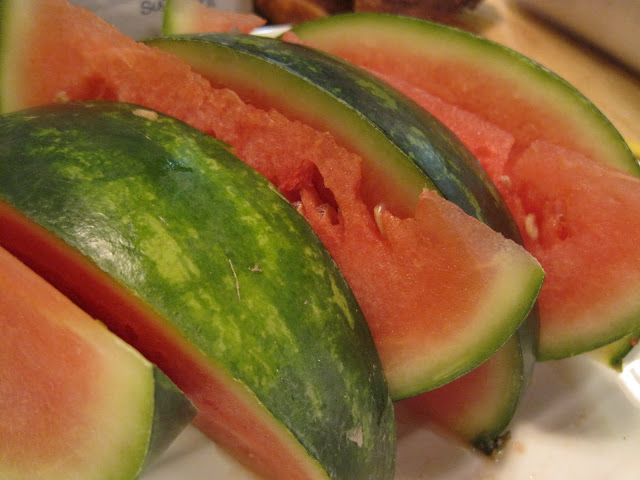 When we announced crisp cold Watermelon to go with the rollkuchen ..
the class erupted in applause.
I had learned a not so humble and yet rather enjoyable technique from Chef Dez when we had taken in his class. After each menu item was handed out for us to sample.. he would in a louder than normal voice ask. .
"so .. how is it?"  I liked his confidence in this question since he knew full well that no one would boo him out the door.  When something is tasty. . .you can go ahead and ask your guests "how is it".  .and then enjoy the applause and the murmuring of approval. 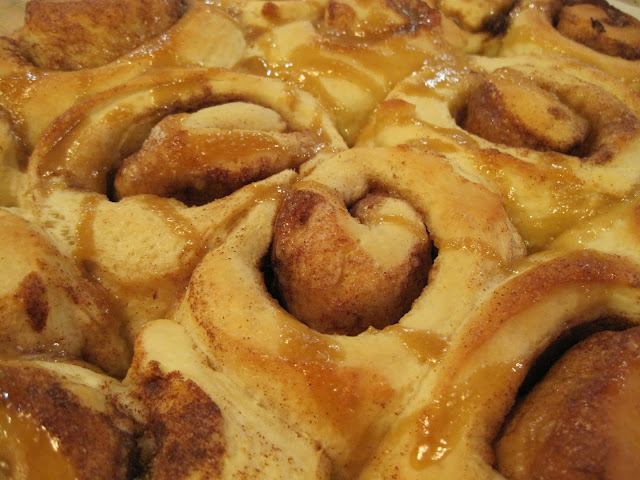 Unless you have made homemade cinnamon buns you have something yet to try in life.
We asked the question and when some admitted they had never ever made cinnamon buns. . .we offered them several reasons why they should not delay.
I mentioned to the class that the scent of cinnamon in the home is often rather like a dab of perfume behind your ear to perk up your loved one. 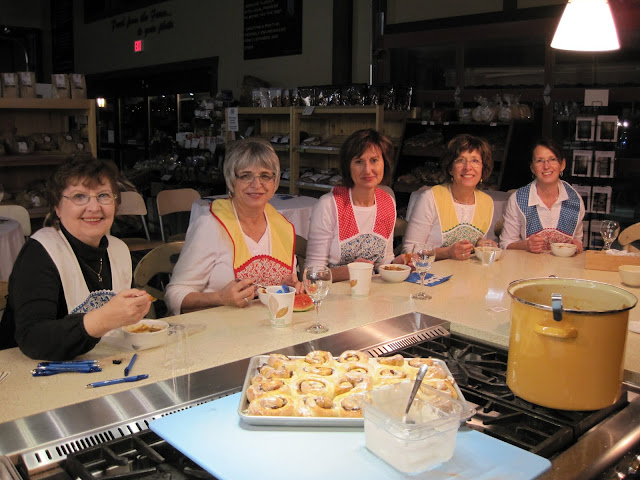 After the last of the class walked out the door. . .
we took our turn at the counter and enjoyed a bowl of hot borscht  .. .some rollkuchen and of course cinnamon buns for dessert. 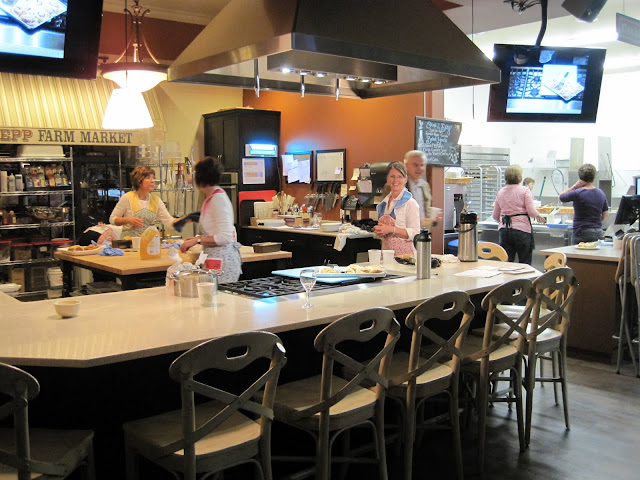 We were told that we were free to go after we had eaten. ..and they would be happy to clean up.
We, being taught a thing or two by our own mothers.  ..
stayed and cleaned up our mess and debriefed and chatted away happily that our first ever cooking class had been a whole lot of fun.
Interested in learning to make Paska ..Zwieback and Green Bean Soup?
The information you need is right here.
all for now.  .