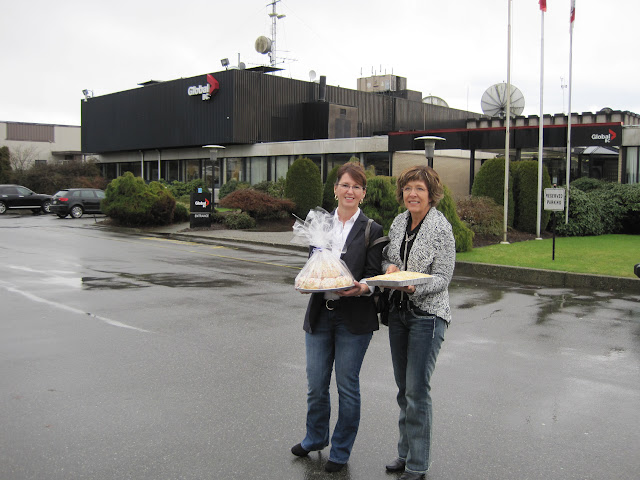 Do you watch Global BC Noon News?
If you watched it yesterday you will already know what this post is about.
On Thursday I received an email from Vineeta the producer of Global BC News.
She asked if I would be interested in coming in for a chat.
I emailed back and said. ..we`d all be delighted to come. .
She emailed me back and said .. . .bring one.
So . .I sent out an email to my girls and told them . . . and asked who would come hold my hand. .
and Kathy. . Kathy my friend for over thirty years. .
who knows everything about me and is still my friend . .
said. .
I will. 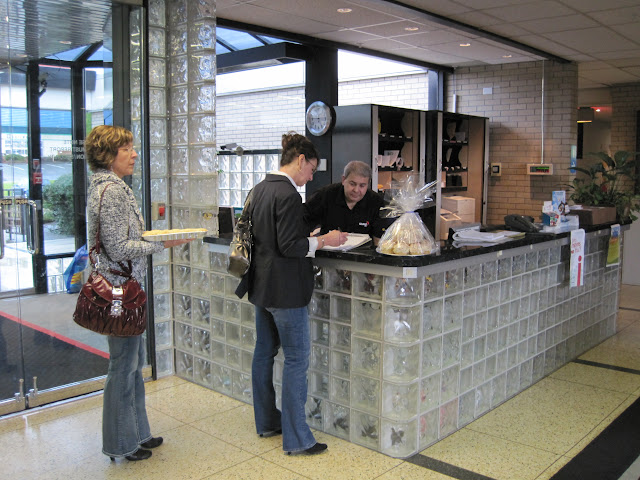 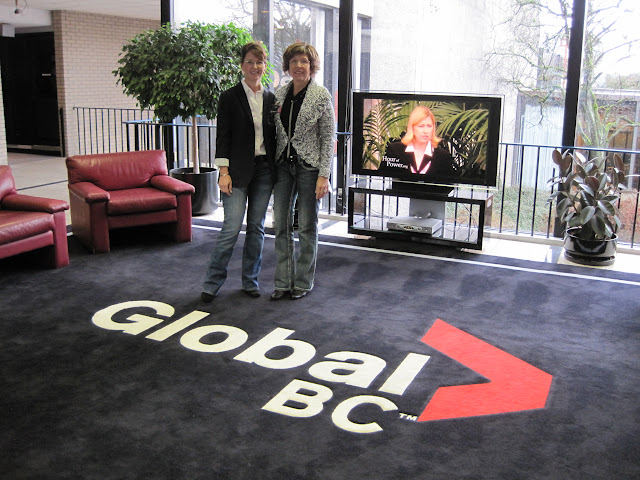 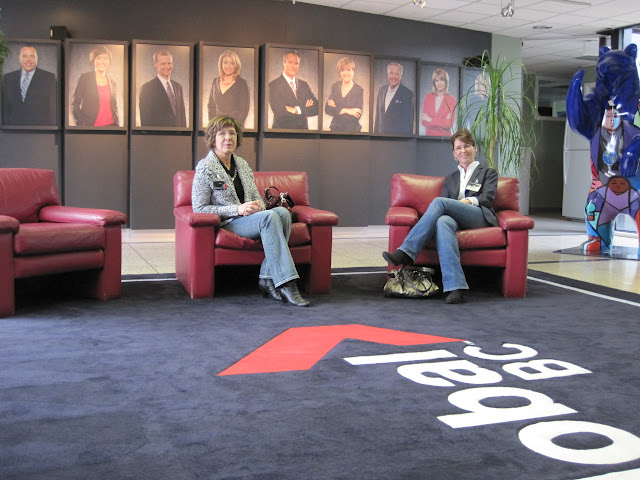 We sat underneath the wall of news celebrities and watched the news.  ..
of course. 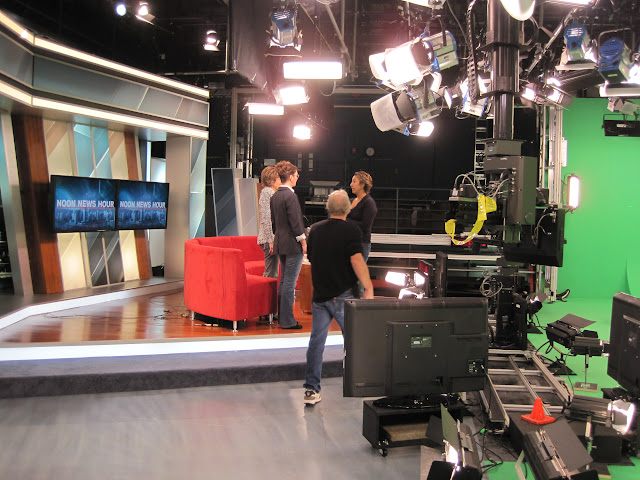 Vineeta the producer came to get us ..
and was happy to see the food.
Being regular Global TV News watchers. .
we know how they love it when someone brings food. . .
so we had already thought that one through. 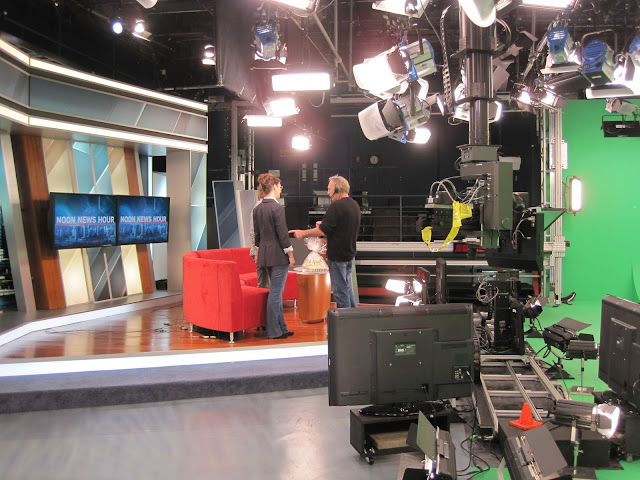 The camera man put on our mics and asked told us not to talk during the weather. 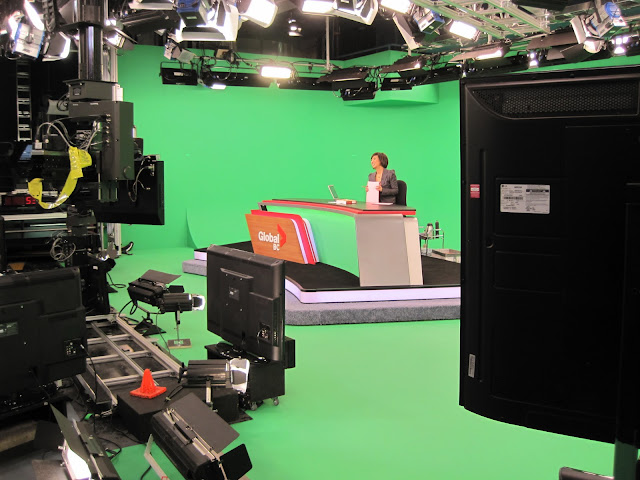 The set that always looks beautiful when we watch it on TV was really all just a green screen. 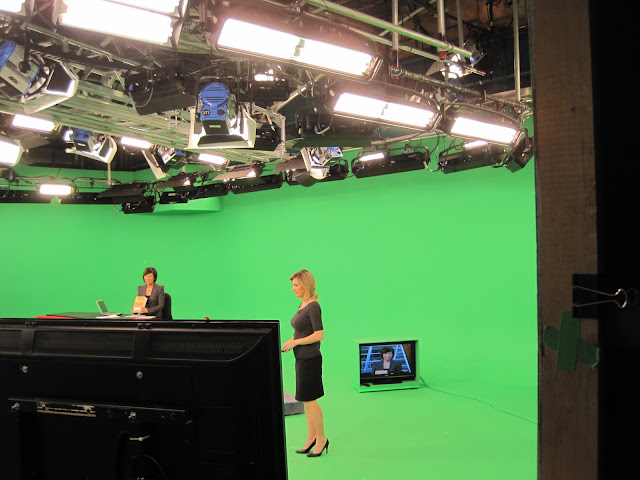 Kristi Gordon the meteorologist was busy explaining all the rain we've been having. . .
and waving into the green screen behind her. 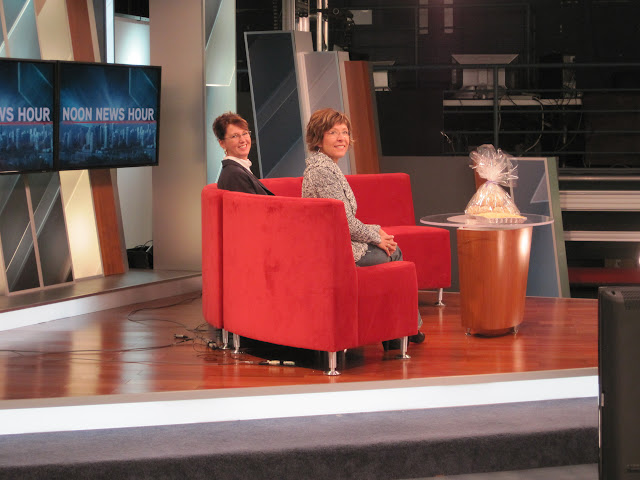 The guys. .
were allowed to come right into the studio and had a spot to watch from the sidelines.
We both .. .
as if we were synchronized women . .
handed the cameras to our men. 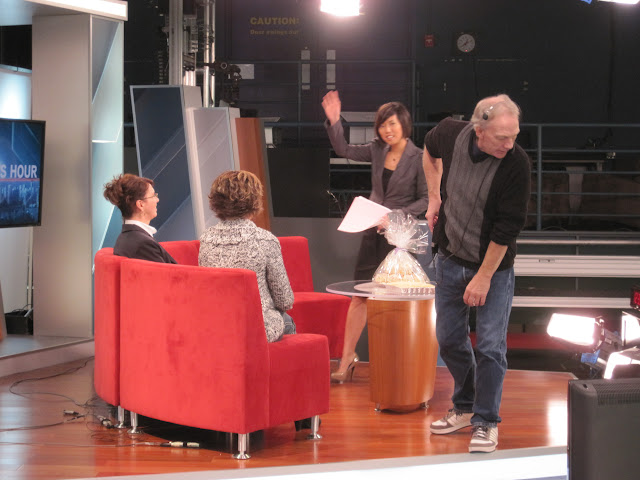 Sophie Lui . . .waved at them as she came to sit for the interview.
The camera man asked if he could unwrap the cupcakes Paska.. . .
and Sophie. . .did a thirty second .  .."hi ..I'm Sophie. .how are you? .. .is that the cookbook cover behind us?" and then the interview began. 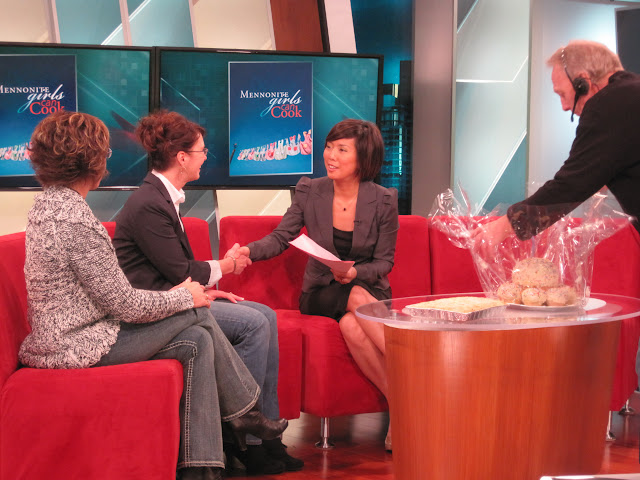 They seems so nice when you watch them everyday on TV. .
and they are.
She was warm and if I really tried. .
I could almost believe we were just talking. 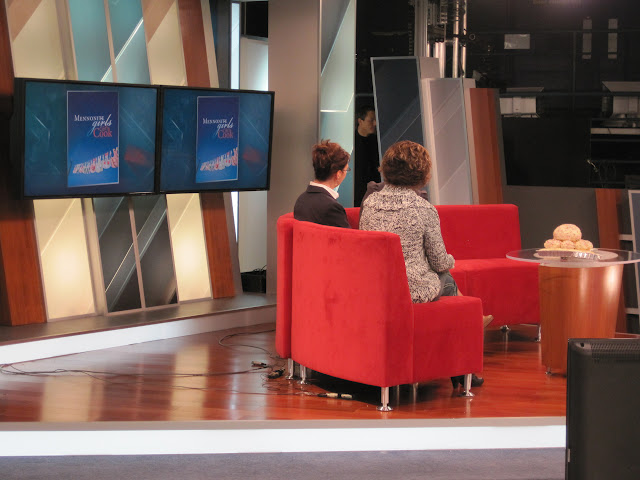 While the interview was going on . .
we saw Jay Janower the Sports reporter eye the food as he walked to the sports desk.
We also know by watching the Global Noon News regularly ..
that Jay Janower loves Ukrainian food.
And then. . .
five minutes after it began. . .
it ended. 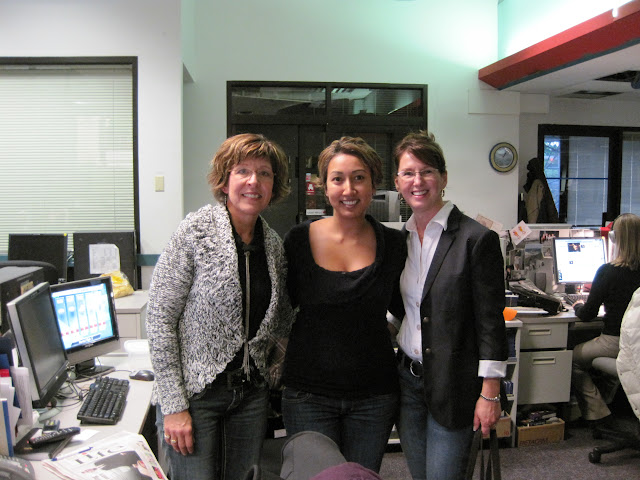 On the way out the door. .
we stopped to chat with the producer Vineeta.
She was kind and gracious.
These are the people that we invite into our living rooms everyday.
I always wondered if they were nice. .
and now I know.
We went out to Cactus Club for a celebratory lunch.. .
oh it tasted ever so good.
I was reminded in the morning of the first time I can recall public speaking.
It was for my parents 25th wedding anniversary when I was 8.
My mom had picked out a 25th anniversary card and had me memorize the verse.
The morning of the anniversary when my sister-by-love was putting my hair up. . .(suddenly thinking here a similarity in public speaking events with my hair). . .
I told her I was terribly sick. . .couldn't go.
She said. . ."you are just nervous"
I said. . "I don't think so.  ..I'm terribly sick"
Miraculously moments after reciting my recitation in front of the church full of people.. .
I felt ravenous.  This was a similar feeling.
If you missed the interview. . .but you already know what Mennonite Girls Can Cook is cooking up.. .
then you know what we said.
This journey with Mennonite Girls Can Cook continues to be a gift.
Thanks to Herald Press . . we hope to feed lots of hungry kids.
God is so amazing.
He has done this thing.
He alone is responsible for the gift of creativity and the gift of joy in giving and the gift of sharing friendships.
all for now. . .