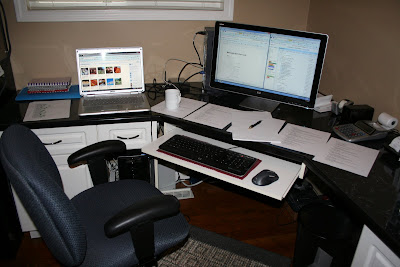 These days. ..
I am often found here in my cozy little office. .
my screen split down the middle between two documents. .
and my notebook open to a third application.
The manuscript has left for a testing of making sense. .
and now has come back from it's visit to the editor and thus the revisions of the edits and the questions that need to be clarified are underway.
Just to give you a brief idea of how the book is developing I thought I would give you a simple timeline of what has happened so far.
Once the decision was made to go ahead with the book called Mennonite Girls Can Cook. .
I asked Judy and Anneliese to become my right and left arms.
Together we decided which recipes we wanted most to include in this book.
We made a very long list and then whittled it down to a compilation of recipes that we feel should be in every Mennonite and beginner cookbook.
We delegated the recipes around to the other girls from the blog. .
and then we all set to work to think through our recipes. . .testing. .writing. .and photographing them.
This all took place during the spring and summer with the final recipes being completed early September.
As they came in through google documents. .
I put them into folders and their pictures were uploaded onto various albums that the design team will then be able to download and insert into the final manuscript.
While Anneliese and Judy were doing the first set of edits I was making a map of the book.
Every recipe has it's spot and has numbers coinciding from the map to the folder to the album.
Judy and Anneliese each read over all the recipes checking for obvious errors and then I did a third round before beginning to compile them all into one manuscript.
On October 1st it was sent to the publisher and we all took a bit of a breather.
Then. .
Amy our publisher sent it on to the first round of professional edits.
A month has passed. . with parts of the manuscript coming back and then being sent off again. .
and now I am at the stage of receiving the recipe edits.
So . . .
currently. .I am reading through the recipes once again . .
emailing the girls with questions regarding their recipes. .
and then making my notes in green as opposed the the red that had been sent to me.
It is just the most fascinating process.
We have learned an enormous amount in the past few months and we've all agreed that we would never attempt to self publish a cookbook and are thankful that we had the good sense to not even try.
For those of you that have asked the hows and whats. .
I hope this fills in the details for you a bit.
I can't imagine how we would have accomplished what we've done without all ten girls doing their part.
Things will be a bit quieter here on my personal blog.
During the next month I plan to post three times a week.
I'll be back to full postings the beginning of December.