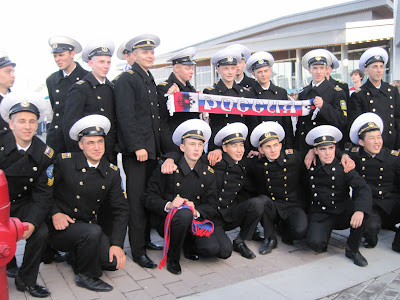 Here is a group photo of the fellows in uniform.
So . ..what's your guess . .
where are they from?
OH . .fantastic news on yesterday's Parking Ticket. . .
my beloved called up the folks at Impark and explained the ticket machine problem and he was issued one of three in a lifetime free passes. Apparently you are allowed to make three mistakes in your lifetime on punching in your stall number. Okay . .seriously .. the two of us can't be that off our game to punch in 0005 instead of our stall number 1235. . .but no matter. .
he thanked the man and we will never leave a impark lot without double checking to make sure the meter box is in fine working condition. 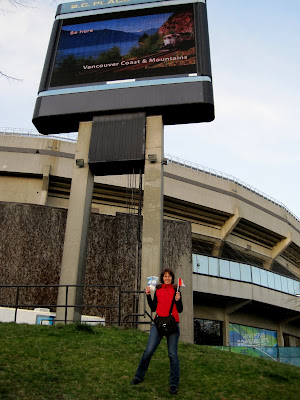 Holding tickets for the Victory Ceremony later in the afternoon we found ourselves roaming the streets taking in the sights and sounds around us. 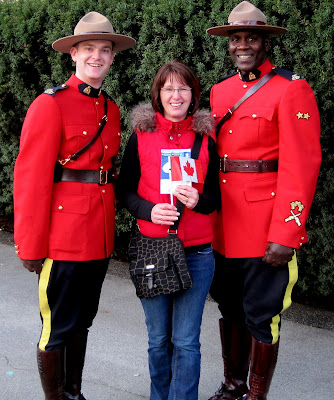 Never one to stay away from a photo op . .
these handsome Mounted Police approached me agreed to pose with me.
Are they not just so handsome?. . .too bad I was in a blink. 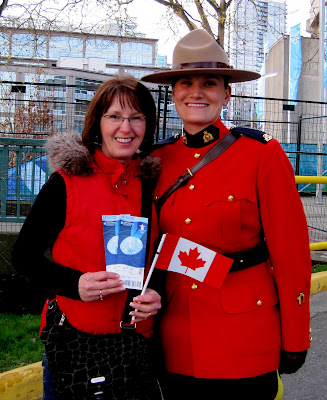 I found another one. .
and thought she was so beautiful. .
and she was the nicest Royal Canadian Mounted Police woman I have ever had the privilege to meet.

We found that everywhere we went the Police. .and there was plenty to be found.. .
were so polite and helpful. . it really made me proud.

We also were so impressed with all the volunteers ..
they are everywhere. . looking for lost sheep and so willing to point folks in the right direction. 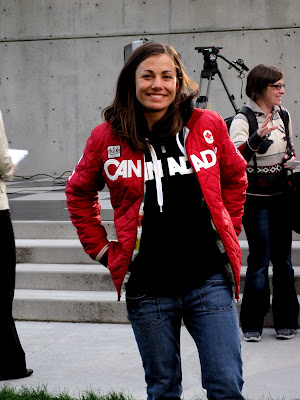 The highlight of the afternoon came as we were passing by the CBC broadcast station.
We noticed an interview was just beginning so we ventured a little closer to have a look.
Imagine our delight to find our own Snow Board Gold Medalist Maelle Ricker.

We waited until her interview was over . ..and then. . 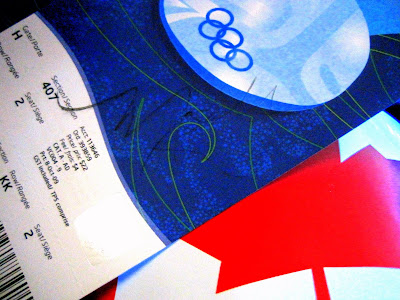 I held out my Victory Ceremony ticket where she would be receiving her Gold Medal. .
and she signed it.

I have to say. . .I felt tickled pink to have that perfect moment.

She was just a delight .. friendly and still very new to her new celebrity. 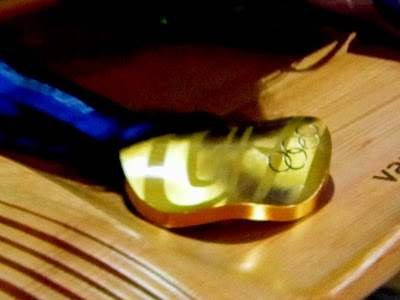 We carried on our way . .
found a Miletones Restaurant in Yaletown and shared a burger.

We watched the Canadian Women play hockey . .
chatted and relaxed. . .
phoning our boys to tell them of our good fortune. 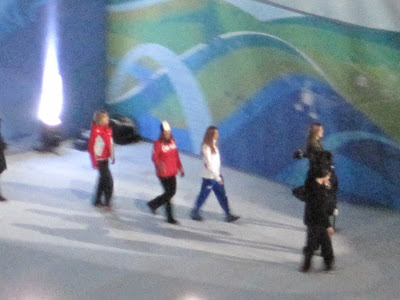 That evening when we saw all the athletes receive their medals. .
we cheered with the crowd for all of them.
Each national anthem had us all standing and clapping and cheering for the medalists. .
but when Maelle got her Gold medal. .
I cheered just a wee bit louder.


After enjoying a concert by Paul Brandt. . .
we walked back to Yaletown. .
hopped back on board the Canada Line. .
and kept our eyes pealed for athletes.