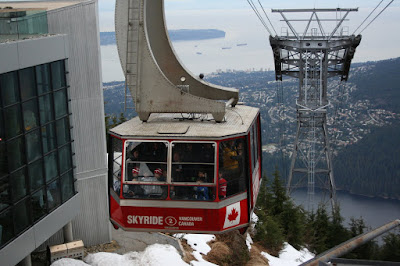 I seriously have the best group of friends that read my blog. The comments. .the emails. . and the phonecalls all made my birthday delight even sweeter yet.

Thank you so much dear ones.

After the visit at the top of Grouse Mountain. . .we took the Skyride down that was bringing more young budding Olympic hopefuls up to have a hockey game.

I worried not one speck about the trail. . . 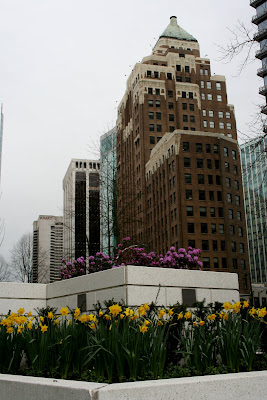 Arriving back in Vancouver City center. . .

we stopped at the daffodil bed and observed a moment of silence for the winter that never did arrive this year.

The city is in full spring bloom and full of national enthusiasm. 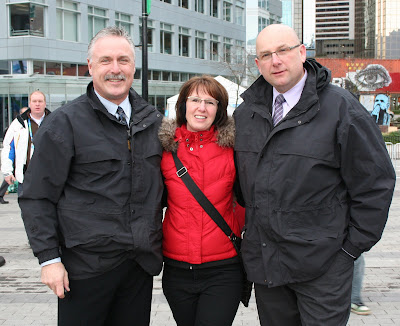 If you are locals. .

I need not tell you who these fellows are.

They are the faces we often see on the television in connection with our local police force.

They may not be in uniform but trust me. . .they are the boys in blue.

and the picture op was a natural progression for all of us.

Naturally I informed them of my 51st birthday . . .

and naturally they insisted on having me in the picture that I was about to take of the two of them.

For the record. .they do not have me cuffed behind my back . ..nor are they my body guards. .

though the thought of telling you they were. ..did cross my mind. 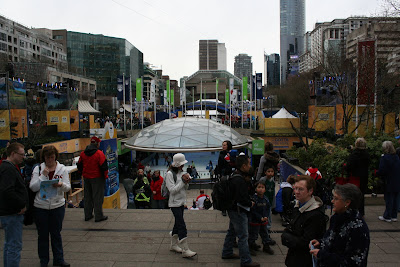 It really was buzzing.

I was buzzing too. .

and after a lap from the Olympic Cauldron from one edge of the city. . .

across to the bay on the other side where the Russian Pavilion is at Science World . .

we called it a day.

We decided a birthday lunch at the Spaghetti Factory was in order.

I spotted one more celebrity and I'd show you today . .. but I need a post for tomorrow. .

so you'll have to wait for that picture op.

I am finishing writing up this post after a tasty bowl of spicy Borscht.

I made a pot in honour of the Canadian vs. Russian Hockey game.

Is was a fantastic game. . if you are Canadian.