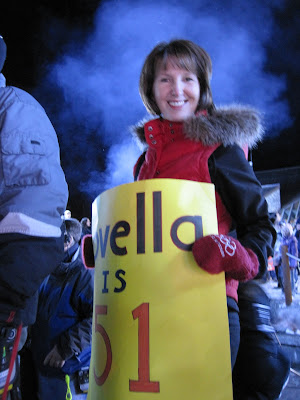 Sure. ..life isn't always like a bowl of cherries .. .
but yesterday for me. .
it was.
We had our alarm set for 2:30 . . .
we had our clothes all laid out. . .
and by 2:45 we were on the road.
When we got to the parking lot at Grouse Mountain we could see a line up at the gondola.
Terry dropped me off and parked and I went to go buy my birthday present ..
the tickets for the ride up.
The ticket price was cheaper than Olympic event tickets. . .
more expensive than the Victory Ceremony tickets . . .
but as far as penny for penny for fun times. .
the cost of the gondola was worth the priceless fun at the top of the mountain. 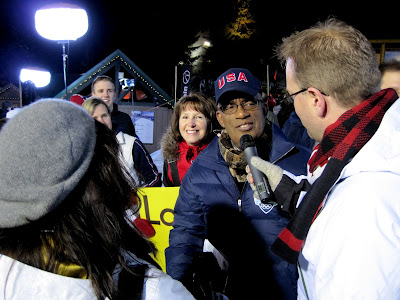 When we got home later on we reviewed the show that we had recorded and wrote down the times that we were spotted for our next family dinner entertainment.

Of course our children will want to witness their parents once in a lifetime guest star spots on the Today show.
For the record. .by the third hour we had figured out where to stand and slowly edged towards the spot directly behind the Today show folks. 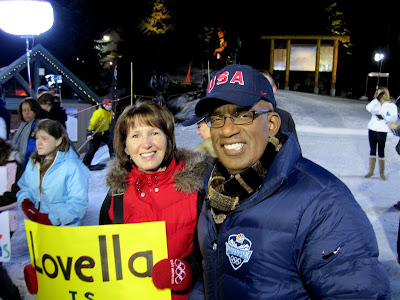 Every weekday morning . ..
we watch our Today show friends for awhile together and then they are my diversion from boredom while I do my walk on the treadmill.

I wondered . . .
would they be as kind and friendly as they always appear on TV?

The answer is YES.

Al Roker signed the birthday poster that my beloved made for me! 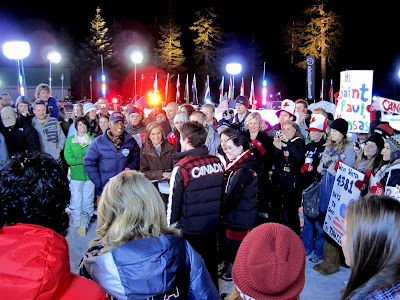 Over and over again I was so impressed to watch the Today folks smile for the camera posing with fans and then most often ask if the shot was okay . .and then always said. .Thank you . . the pleasure was mine. 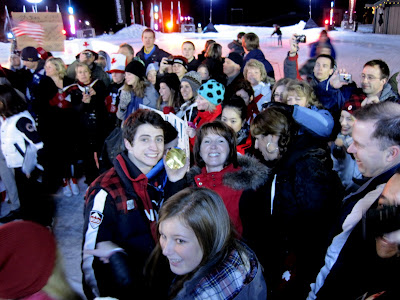 I just have to slip in this little bit about later in the day to go with this picture. We stopped back in Vancouver to see how the crowds were faring and when we walked past the Royal Canadian Mint and saw the two block line up to see the medals inside. .
we kept walking.
As you can see in the picture above I not only saw a Gold Medal ..
I held it.
I asked Scott Moir the IceDance Gold medal winner if I could see his medal please.
He said. .."of course. ..but you need to hold it too."
I said .. ."really?"
He said. . ."yes of course. .but take off your mitten, you have to touch the gold with your bare hands"
So . ..I did .. as you can see.
Scott and Tessa were both so sweet and spent so much time talking to the crowd.
They had not slept yet since their win the evening before. 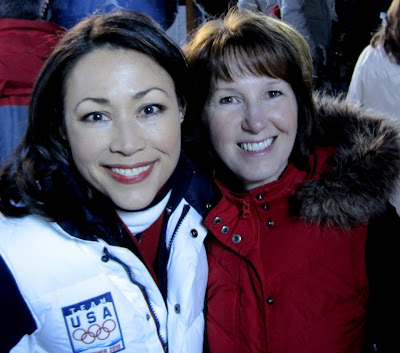 Ann is just as nice as with the crowd as she appears on the program.
I watched her for quite some time before she came close enough for me to snag.
She truly has manners and grace of a lady. 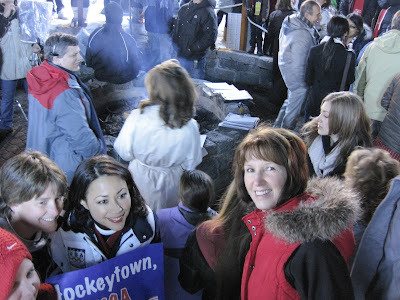 I put this picture in because it was just as she was coming closer for me to snag and as you can see I had a glint in my eye as I looked at Terry. 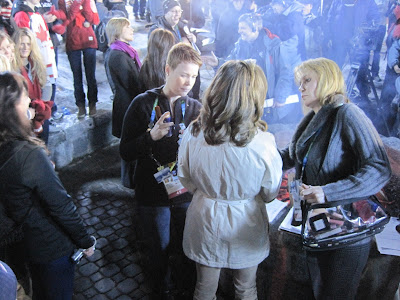 I added this picture.
Natalie was having some touch up's done.
The make up girl on the right. . and the hair girl on the left . .
buzzed about the Today folks in between air time. 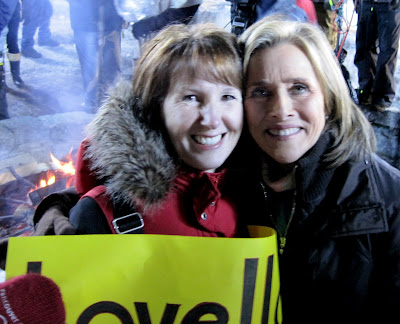 Meredith gave me a big hug and a peck on my cheek after reading my sign. 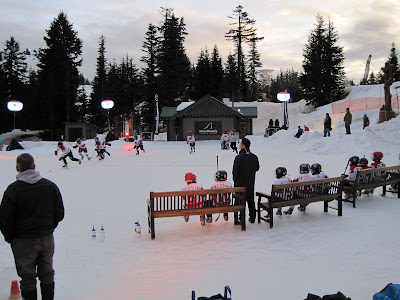 About 15 minutes before the end of the show we looked at one another and agreed we had been satisfied with our morning accomplishments.
It was still early . . .near 7 AM and now light and we headed into the Chalet for some breakfast.
After breakfast we watched these kids play their own hockey game on the ice rink. 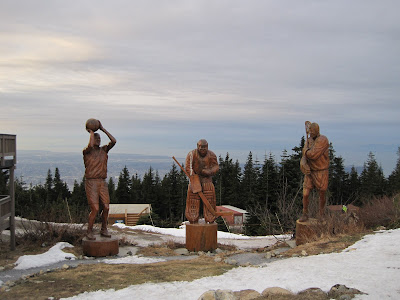 We sat near the local radio station morning people . ..listening and watching what we normally just listen to.
After our omelet toast we headed back outside and took a look around before heading back down the Gondola and over the Lions Gate Bridge toward Vancouver City Center.
Terry's cell phone rang now and then. . .
as we were spotted on the show by family and friends.
In the evening my beloved fetched a pizza. . . where he found some of my blog friends sending home greetings....Thank you. . .and we watched our Canadian Boys play hockey. .
What a fantastic Day.
There is always fun. . . if you know where to look.
I just want to thank you all for your sweet Birthday wishes yesterday.
You truly are so kind .. it is most humbling.
Thank you for coming along for the fun.
It really is true that life is richer. ..when shared with people you care about. . .
and who care about you.
All for now. .