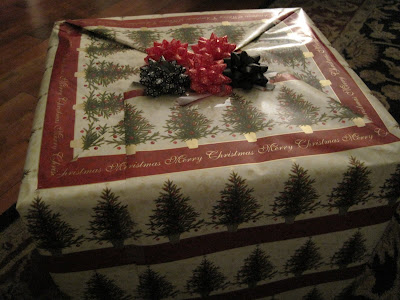 Dreadfully sorry to have left some of you fretting about my where abouts yesterday.

Our family was over on the 27th and since we coaxed them to stay until bedtime . . .

I had no chance to do my evening post for the following morning.

More about the 27th tomorrow.

Pretend today is the 26th and I'm posting on the evening of the 25th.

My beloved had been full of mystery and intrigue the days just prior to Christmas.

He announced he didn't need any help this year ...

which suited me fine since I had my own fish to fry.

On the 24th he came to inquire about a bow.

I told him I was using ribbons this year for part of the fancy-shmancy Christmas in the bungalow.

I told him there were a few at the bottom of the Christmas wrapping paper box . .. 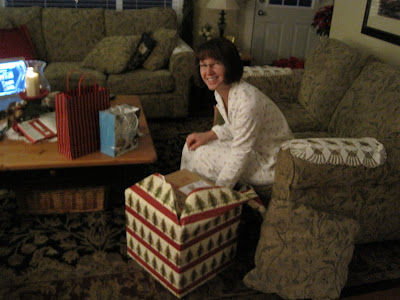 The box appeared beside the tree on Christmas morning . .
I nearly tripped on it as I was doing my morning routine of lighting the tree first thing . .
before turning on lights.
Apparently my ribbon for the garland making episodes that had his lunch late on several occasions had left a deep impression on him . . .and he has now done his part to be sure that meals and coffee breaks will not be late because of whining from the sewing closet.
I had one project that didn't quite make it under the tree.
I had sewn up a little apron for grandgirlie with the left over fabric from my care group girl aprons . . . and found that it was just the cutest thing for her them to wear while helping in the kitchen.
The lil' farm hand's Daddy was mortified to come into the kitchen one afternoon to see his son wearing the festive looking Christmas fabric and suggested that a manly apron should be sewn up .. .
lickety split.
Being the conscientious mom I am . ..
I ran straight to our local Wallymart and found this JD fabric. 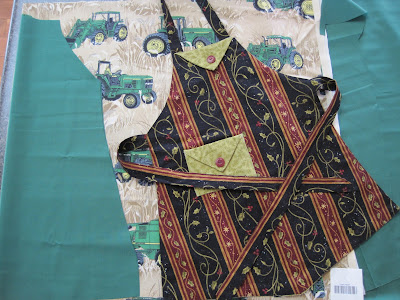 What didn't happen quite as quickly was the sewing.

I left it sitting on my sewing counter hoping the elves would have it done in the morning but still it sat.

When I opened up my Christmas present . . .

my beloved announced with a rather winning smile that they tossed in a pack of free thread.

It was JD green.

I don't plan on sewing JD green overalls for all the menfolk in the household.

but at least one lil' farm hand will have perfectly matching thread for his workbench apron. 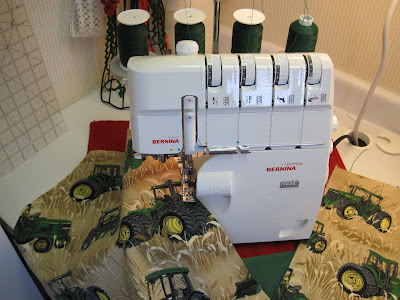 that is just the typical thing that made me smile these last few days.