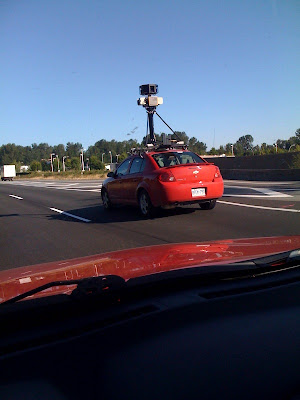 (Updated version of the story from my roving reporter at 7:51 am)

sends me an email with pictures that put a smile on my face.

I'm not talking one of those forward emails. . .

I'm talking about pictures that he knows. . .

had the opportunity arisen.

He was heading home from work(to work) one day when he noticed the google street view camera car coming behind (ahead of ) him.

Being the conscientious driver he is. . .

and snapped it's picture.

the difference between him and I. . .

is that I would have called him straight away and told him what I had done. . .

until the street view was available online.

the link to the screen shot you can see below. 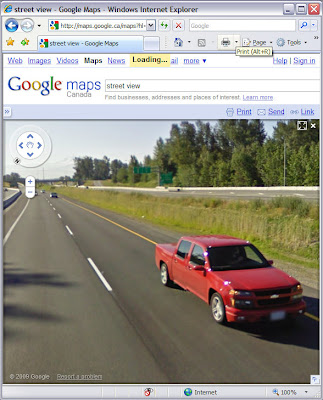 Have you seen the google street view vehicle come past you?

I wonder if it will come past the bungalow. . .

I have my eyes open wide.

and grandgirlie and I are heading to the fabric store.

It's been about 28 years since I've attempted that with a toddler.

I'll let you know how that works out.