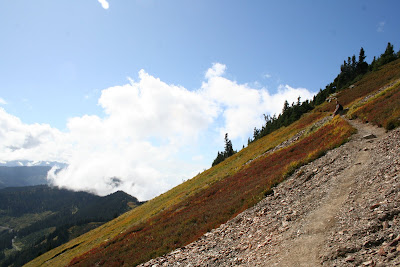 Yesterday morning .. .
we hummed and we hawed. .
and we . .
hummed and we hawed.
Finally .. .we decided that we may not have many more chances to climb up Mount Cheam this year.
I quickly packed our usual hiking food . ..babybell cheese, trail mix, crackers and then I ran out to the apple tree and picked a few fresh apples.
We thought we knew the directions.
Perhaps we thought we did since everyone we know has climbed Cheam.
We didn't know the directions.
I had our trusty hike book with us . .but we didn't look to see the kilometer count from the beginning of Chilliwack Lake Road
. .and before we knew it we were at Chilliwack Lake.
We turned around. . .watched more closely for the turn off but still neglected to look at the kilometers . .counting backwards.
After passing it once more. . .
and asking for directions once. . ..
we crossed the little bridge once more and saw the sign to Chipmunk Peninsula and turned in that road and then . ..
we saw the sign for the Foley Creek forestry road ( which was hidden).
Had we set our odometer to ) at Veddar Crossing and driven the 25 kilometers. . .
we would likely have found it without problem.
We just assumed there would be a Provincial Sign marker directing us to the Mt. Cheam hiking trail.
We had no idea that the logging road to the trail was so long. .
and we were surprised when we got to the top of end of the logging road .. .
finding a small car.
The man was just coming back from his hike when we arrived to begin ours .. . at 12:45 pm. I saw his license plate declared himself to be Chef J and so I asked him were he does his "chef -ing" and was delighted to learn that he was the chef responsible for our son and daughter in law's delicious wedding brunch. . . .small world. 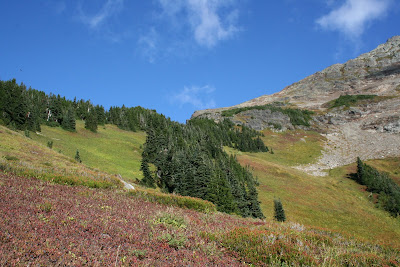 An hour and a bit after beginning our drive up the forestry road. .
(which we were sure was the wrong road. . .and nearly turned back)
we began our hike.
It seemed reasonably pleasant at first . ..
and then the old logging road became a trail which curled down into a valley ..
and then up. . .
and it was uphill from there on.
The hike itself is not that long.
It is about a 5 kilometer hike to the peak from the parking lot.
As per our usual custom .. .
I made dreadful huffing and puffing breathing sounds while my beloved hikes ahead and stands and waits .. .
at an appropriate distance on the trail above. 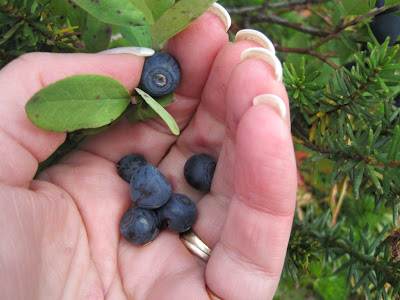 We've learned that waiting until mid September to do our yearly hike ..
comes with rewards.
The blueberries were perfectly ready . . .
and nearly the entire hike offered the tastiest treats.
All the dark red patches on the mountain sides are blueberry bushes with the leaves already colored for fall. 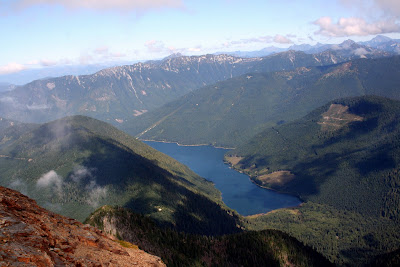 After a grouping of switchbacks and then one steeper climb ..
we were rewarded with an east view of Jones Lake.

There is only one small area of trees that obstructs your view. . .the rest is open and I found myself thinking it would be worth coming back during the Heather season . . .and the alpine flower season. 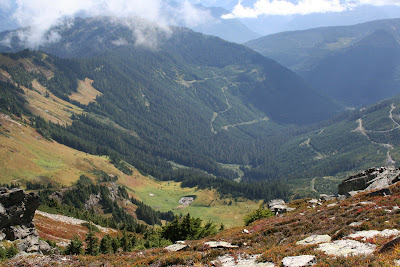 This really is one of the most rewarding hikes that we've done.
Thousands and thousands of acres were clear cut some time ago . ..
the views all around spectacular.
In the picture above .. you can see the Spoon Lake below where we began our walk up into the alpine meadows. 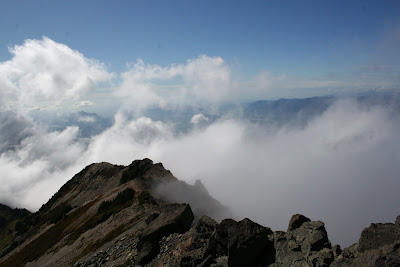 When we arrived at the peak that has a view of the western valley from where we had come. . .the fog and clouds nearly obstructed our view.

In between the clouds we could see the valley below and the Pacific Ocean in the distance.

The clouds moved so quickly and the wind was quite strong and I felt quite chilly in my T shirt. 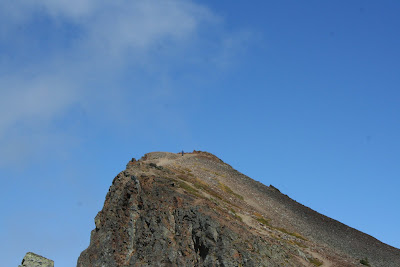 I sat down to feed chipmunks. ..
(I felt that if they were sports enough to climb to the top . .they deserved a few peanuts)
Terry continued the climb to the top peak.
It gave me the willy's just looking at him climbing it.
(click to enlarge the pictures. . .) 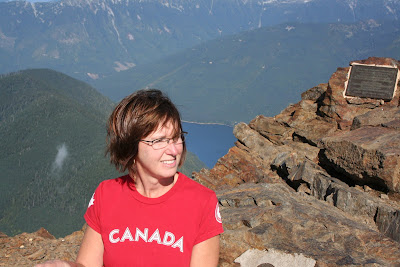 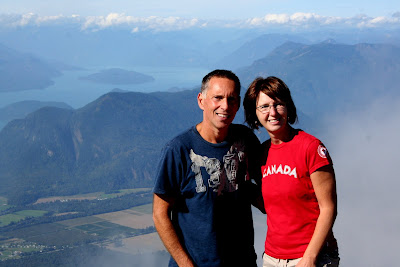 I just couldn't bring myself to look over the edge. .
I believe it is straight down. . you don't have to convince me. 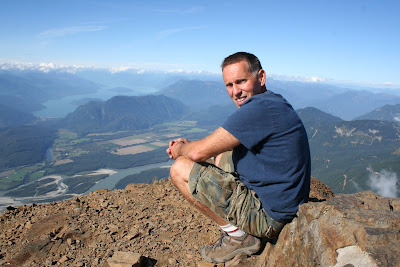 It may not have been the clearest view in every direction. ..
but I'm glad we went.

Not counting the logging road drive . .which we did not enjoy. . .
the two hour 600 meter elevation gain to the top .. .
left me wondering why we waited so long. 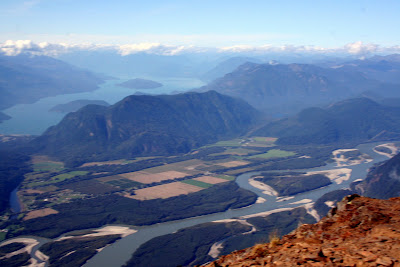 I have no idea how many times I've looked at that mountain peak in my life time.. .
making a note to climb it one day.

We've flown over Harrison Lake and the Fraser River before.
It was wonderful to see the places we often drive from the vantage point of the eagles. . .
but standing and seeing it as long as we liked. .
was amazing. 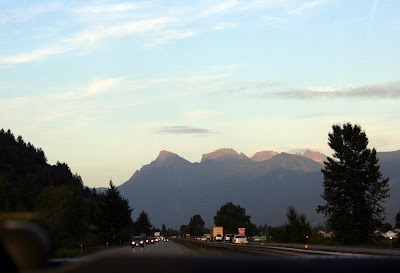 As we were driving home. . .
I turned around and took a picture of that peak on the left side.

On this .. .my year of Jubilee. .
I climbed Mt. Cheam with my beloved.

It's a wonderful thing to have the health to climb mountains. . .
For more pictures of our Mt Cheam hike. . .you can view the web album by clicking here.