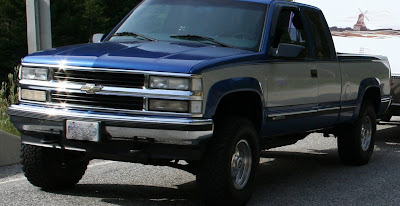 has always had the natural inclination to keep his vehicles. . .

I learned long before we were even married. . .

that parking any of his vehicles between two vehicles in a parking lot would possibly cause a dent. . .

which could lead to another possible dent .. . .

and before you would know it. .

He knows the truck is a material possession and knows it's just a thing... .

being careful with his vehicles is built into his genes. . .

and there is nothing he can do about it.

I've become accustomed to driving clean vehicles. . .inside and out. . 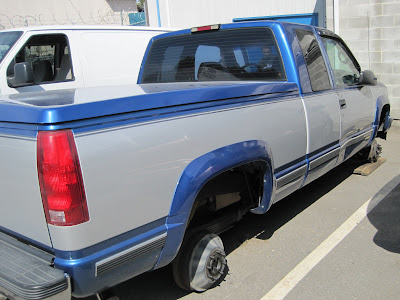 I went along yesterday to the body shop where the truck was towed.

It had no shoes.

It's not that bad. . .but it is annoying enough to make us go home and eat pasta.

Pasta helps everything. . .in case you missed the post on Kanneloni Macaroni. . . 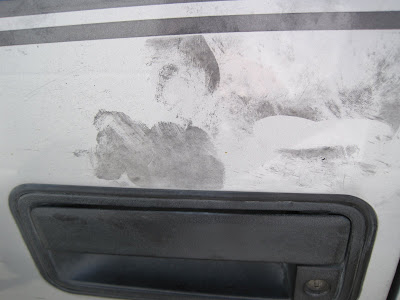 Our local detachment of the Royal Canadian Mounted Police. . .

but said that there was a bunch of rubber gloves found near the truck.

thinking it was the Royal Canadian Mint. .

I thought perhaps they wanted to make a commemorative coin. . .having no doubt read my recent post on Kanneloni Macaroni. . .

but no. . .it was the Royal Canadian Mounted Police. .

I offered them the cigarette butt I had found. . .near the crime scene. ...

The alleged ... thieves had taken the time to cause further annoyance.

The child seat was thrown in the bushes. .

All the contents of the glove compartment. . . missing.

But. . .oddly. .they left our selection of music behind.

I can think of hundreds of things that would be terrible. . .

I have some butter out on the counter. .

We've been learning how to bake chocolate chip cookies.