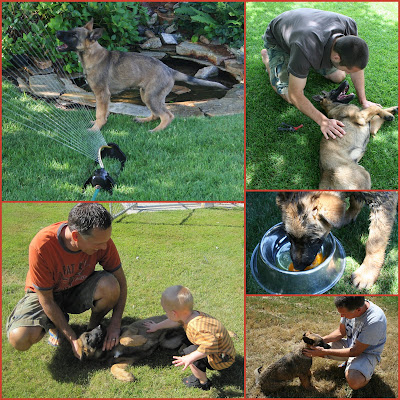 Our foster dog days are over. . .forever.

We all fell in love with this crazy little pup. . and now he's gone home.

It all started July 1st.

He arrived at the farm very dirty. . .rather thin. . . and terribly hungry.

He wouldn't leave Terry's side. . .and was as good as gold.

We put up notices at the community mailboxes. .

checked the classifieds for lost pups. . .

called the animal shelter to enquire if someone was missing their pup.

They would not tell us. . saying that we needed to bring the pup to them.

We found their attitude rather unkind. . and a bit bossy.

We have paid the bail fees for wandering dogs before. . .it's not fun.

We thought that if someone driving by would see "their" dog. . they'd stop and tell us so.

We had removed the tied on bit of collar that would be our "test" of authentic ownership.

yesterday ( 26 days later) we heard that someone had in fact been looking for their dog.

and a full tummy of premium dog food. . .

my beloved set off to go knock on their door.

He took along our phone number and address suspecting that there may be a language barrier.

Minutes later. . the call came. . the dog was wanted.

We called him Little Otis. . .