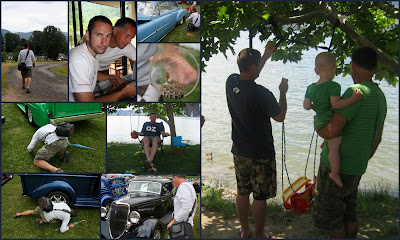 and it was a good thing we did too.

My beloved caught a baby rattler that was borrowing our beach.

and popped it in a plastic tumbler. ..

and kept it by popping another plastic tumbler. .

He let the neighboring camper kids. .

have a look, and was going to let it go up the hill aways. .

but then we decided to take it to the office.

since we then found out that baby rattlers. .

are the most pugnacious little things.

We dropped him into the snake box. . .

where he had company by the big ratter that we had reported earlier in the morning.

the most precious feet stepped foot onto our camp.

The lil' farm hand and his mommy and daddy came up to play relay.

I followed my beloved around the car show. .

he thought I was taking pictures of cars. . .and trucks. .

but I was taking pictures of him. . .

back in the bungalow.