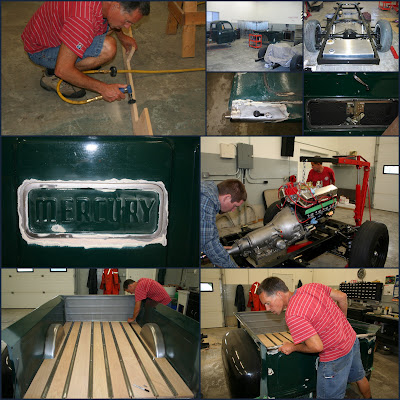 is documenting the process ..

that I would do my best to keep you abreast of the progress.

noting that the last time I mentioned the old girl was back when she was getting her nether regions painted shiny black.

throughout the winter and the spring. . .

that we have a working farm.

After the frame was painted. .

and now the bed has been fitted.

"should the two wide boards be on the outside. . .or in the center with one narrower board in between?" . .he asks

I gawk at the box and at the oak boards one way and then the other. . and offer my expert opinion. . ."which way do you like it better?"

So. . this is how rod building is done here.

and I settle down with my notebook to write and read blogs for a good half hour. .

and we're happy as clams. .

should have a hobby which can be enjoyed by by the other by conversation . .

but doesn't need the other. . to make it enjoyable.

The conversation is pure icing on the cake.

The end of the day, generally finds us meeting in the Arabian Tent for a sip before bedtime.

is the hardest decision of all.

What's happening in the bungalow today?

I have a friend who is working on her Home Ec degree. . .

she's coming to take pictures of me sifting, beating. . .and folding.

In between all that hard work. .