the bride with the netted veil 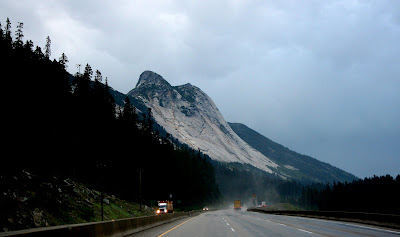 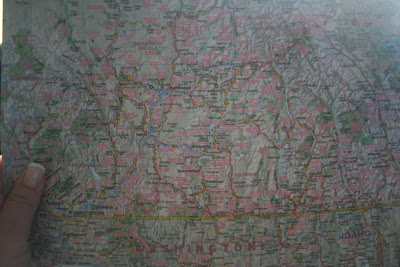 I've taken the liberty to give you a brief glance at the map from here to there.
Notice .. .there are no straight roads. . .that would be a bit further on down the Trans Canada Highway.
I said. . . "if you keep driving .. . we'll end up at Charlotte's house. . she might have Betty over"
He said. . "we have only a weekend"
I said. . " and further down this road yet. . is the Kathi in PEI.
I said. . ."who says we have to be back?"
He said. . ."true"
When you have someone keeping care of the farm who is very responsible ..
you know that they will stay until you come. . .
but. .
with vacation planned for the end of this week. . we thought we best not push our luck. 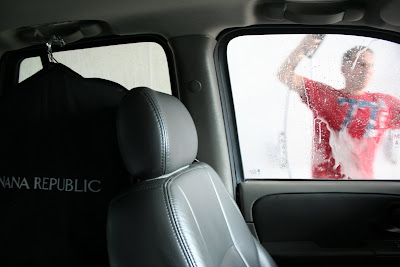 We drove through some unexpected drizzle and when the rain stopped the car pulled into a car wash to have a bit of a bath. 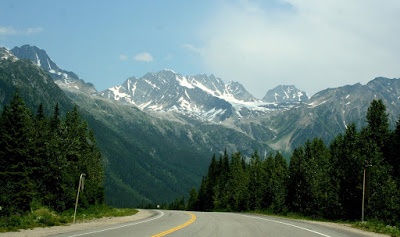 The Rocky Mountains are just that. 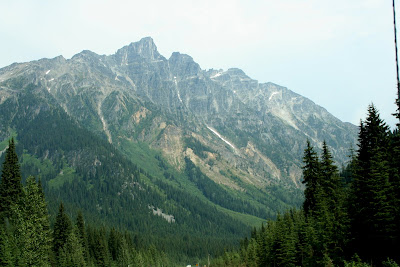 I was imagining someone sitting about saying .. "what should we call this mountain range?"
Someone else says. . "which one?"
The first person in charge of the mountain naming committee says. . ."the Rocky ones". 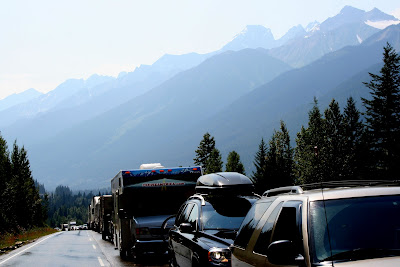 The highway that stretches between the west coast of British Columbia and the east coast of Prince Edward Island. . .is called the Trans Canada Highway . .again a suitable decision.
It is often one lane in both directions.
In this particular section. . it was two lanes going up. . and one lane coming down.
All the lanes were closed for two hours because of a serious car crash. 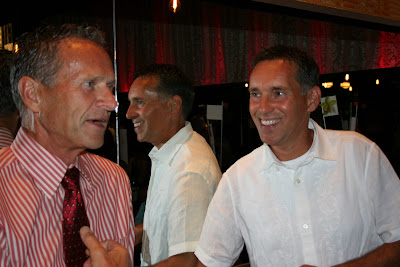 So . ..we arrived at Calgary and found our hotel.
A word to the wise here.
I had printed off the directions as opposed to printing off the google maps.
The directions had us jumping off of the number 1 .. and then turning left. . and turning left some more and jumping back on the number 1 and then repeating the process.
Wrong. It nearly made me crazy. I am such a good navigator. . .or at least I was.
No matter. We made it.
Above you can see that my beloved is chatting with Uncle Elvin.
Since Terry's Dad has passed away. . .Uncle Elvin is the closest male older than my beloved.
It is a blessing when there is a man of care and integrity for a man.
Clearly my beloved is closer to his two sons that to any other men. . but to have a slightly older man that you yourself can lean upon .. .is a wonderful thing.
Elvin and Wendy always seem more like our cousins than our Aunt and Uncle because Elvin was the youngest and Terry was the oldest nephew. 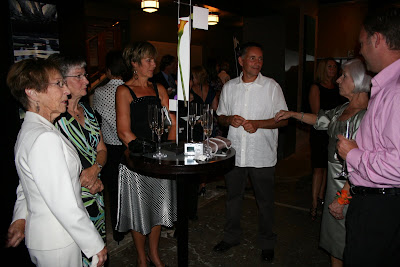 While we waited at the Grand Theatre for the ceremony to begin ..
we were treated to lovely flutes of champagne in expectation of the nuptials being a done deal. 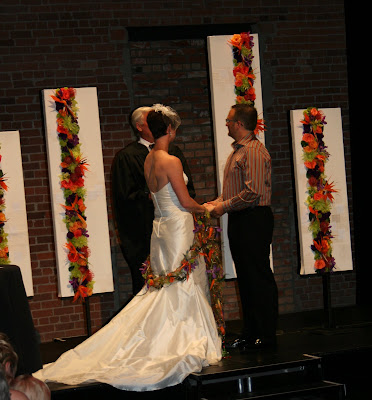 The bride. . our new cousin Kim, .. . married Grant who was a whipper snapper at our wedding.
It is always a bit daunting to do the math. . and though I tell myself that we all eventually catch up to one another .. .we really don't.
The entire weekend. . we were introduced by our Aunt Hilda. . the grooms mom. .
as "this is my nephew .. Terry and his wife Lovella. . .they are grandparents. ."
That might have something to do with the fact that Aunt Hilda is one and a half years younger than my mother in law (mil. . .someone asked me not long ago. . who is mil). .
yes. . as I was saying. . and Grant is Lou and Hilda's first child marrying.
I imagine she feels a bit like the catching up is going to be a bit of a challenge .. since my mil has two grandsons who have since married and had their own children. 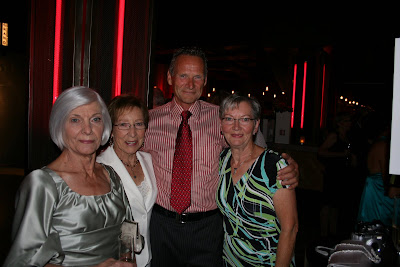 Back to the family.
Above is the tight knit little sibling group.
On the far left is the beautiful silver haired satin dressed mother of the groom .. Hilda.
Next to her. . in the beautiful cream suit is my mil . . .Pauline.
Then. .in the center is the little brother .. Elvin.
And the far right is the quiet, always smiling lovely Loretta. 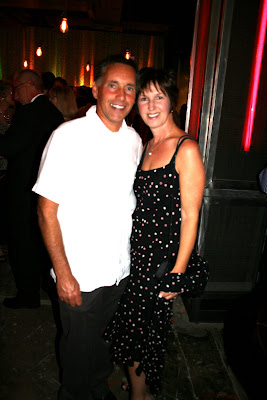 I ran around snapping pictures as though I myself had been commissioned to take full responsibility for the photos. .
I passed the camera off to Aunt Wendy for a picture of me and mine since I had mentioned the polka dotted dress. .
I'm a wee bit sad that my black high slides didn't make it on the bottom.
I'm going to have to take a picture of them another time.
I'm holding the matching wrap .. kind of funny. . but you get the drift. 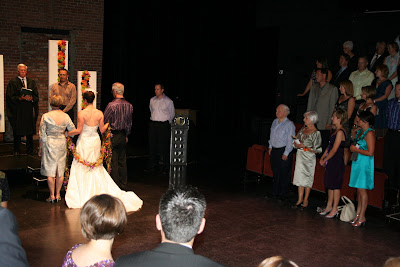 Now, to the important part. .
We were seated in the theatre. . theatre style.
You can see the family opposite. .Uncle Lou. . (he was a bit elusive in the rest of the photos)
and then Auntie Hilda. . and the beautiful sisters. . Miss Carla ..and Miss Nancy.
Our family opted to sit across from our family so that we could see them.
Do you ever notice that at a wedding you can't see your family member as the couple holds hands and says their vows. . the other family sees them.
I've finally caught on to that.
The bride had a length of flowers that acted as her wrap.
She is our new cousin Kim.
We loved her immediately. . 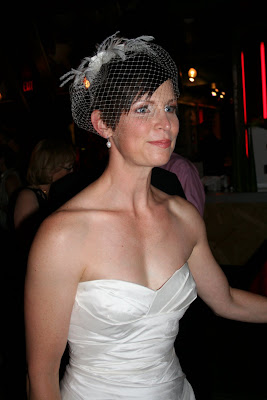 Beautiful. . friendly and
. . . .
when I asked if she minded being on my blog. .
guess what?
Of course she would love to be on my blog. .
Love that girl.
(I considered not asking and apologizing later .. but I'm just not that devious) 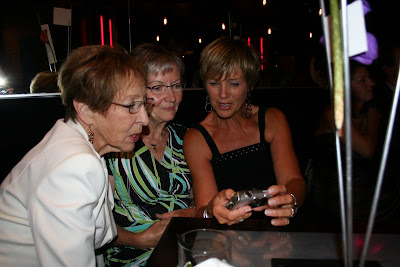 Ah. . yes, after the nuptials were a done deal ..
we were treated to the most amazing little morsels of gourmet appetizers.
The aunties sat around looking at photos of grand kids on cameras. . 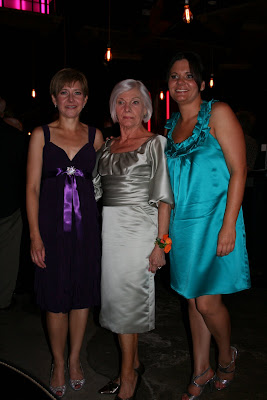 Oh and did I not tell you about Grant .. our cousin .. .has darling sisters?
Miss Carla in the gorgeous eggplant dress. . oh I love that colour. . (you might remember I wore that color to Terrence and Bea's wedding. .)
and on the right in her blue satin sheath Miss Nancy.
When cousins come to Calgary from afar .. they are made to feel special and welcomed.
Love those girls. . 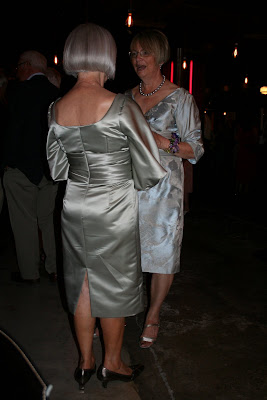 Oh, and the mothers of the newly married couple.
Hilda in her gorgeous satin dress that matches her perfect satin hair. .
and Kim's mom. . .equally as friendly as her daughter . . the bride and just as lovely. 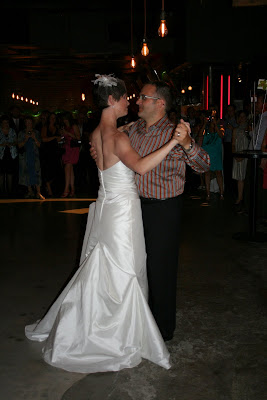 The couple danced so beautifully.
The perfectly executed fox trot. . made us all sigh.
We arrived home last evening. .
the laundry has begun. .
the calendar has been checked for this weeks activities ..
and the packing has started for our camping trip. . at the end of the week.
My posting will be short and sweet for the next few days. . .
I've missed you all and will pop by as many blogs as I can whilst I rush around.
Have a wonderful day my friends.
family