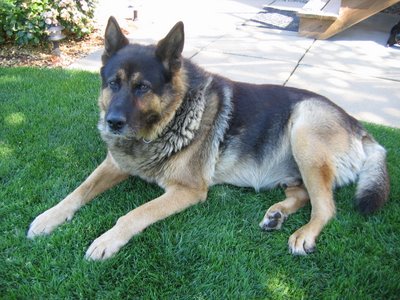 Otis came to live with us almost 12 years ago. I had gone grocery shopping to Costco one morning and I noticed a man selling puppies out of the back of his truck. We had recently buried our black lab that never really did understand why rules about going on the road were for his benefit. Knowing that buying puppies from someone out of the back of his truck could be a bit dicey I peered in. I couldn't count because of the ruckus, but he had at least 20 puppies, all different breeds. I spotted this adorable German shepherd puppy and raced home to confer with Terry. Within the hour we had Otis in the back of our truck heading home.
After reading Becky's post (random ponderings) about her vermin problem I was reminded of Otis's early years and our similar problem. Our good friend Peter the poop hauler would invite Otis into the barn at the beginning of his day. Otis would then race back and forth in the barn while Peter moved out the manure, and hunt rats from morning till night. He'd sniff them out grab them by their throat and fling them as high as the rafters and then move on to the next tunnel.
We had a big white cat named Oliver a few years back. Otis and Oliver had an understanding. Otis held the subaltern position. When Oliver met his untimely death on the dangerous road we went back behind the barn to bury him. Otis followed behind looking suspicious of Oliver's lack of movement. When we placed Oliver in the ground Otis stuck his head in the hole to make sure he was not moving. Terry couldn't resist , he let out a loud meow and Otis jumped vertically about 3 feet. It made the otherwise sad occasion quite amusing.
We never taught him to do his toilet behind the barn, he just had the common sense to think of that himself. We never taught him to sit on the loading dock looking ominous, he just knew it would be helpful.
Otis has been slowing down lately. He has retired I suppose since we haven't any vermin left for him to hunt. He seems to be losing it a bit. In the last year or so he has taken up gardening. He knows we don't appreciate his efforts so he's always careful to enjoy his hobby while we are away. On occasion we'll come home and see bark mulch tossed everywhere and he'll slowly skulk away knowing that we'll not be impressed. We've not ever caught him that is until yesterday. Terry had taken off in the afternoon and I was looking out the kitchen window because we were having a major downpour. I watched Otis slowly get up off the porch and head down the steps. The horizontal rain was getting him wet so he must have figured it was as good a time as any for some good digging. He found himself a nice spot, gave a quick glance around and started to dig. I couldn't believe it. I opened up the door and called his name and the look he gave me was "oh shoot". Poor guy. I just couldn't scold him. He looked so guilty all on his own.
I thought I'd write about Otis today and not on some sad day when we have to bury him under the Cottonwood tree beside Oliver. When you buy a puppy out of the back of someones truck and have no idea where it came from and what the temperament of its parents are, you take a risk. Otis is a bit unorthodox as far as German Shepherds go. He's the ruler of our porch and he is just a great dog.
farm dog life on the farm